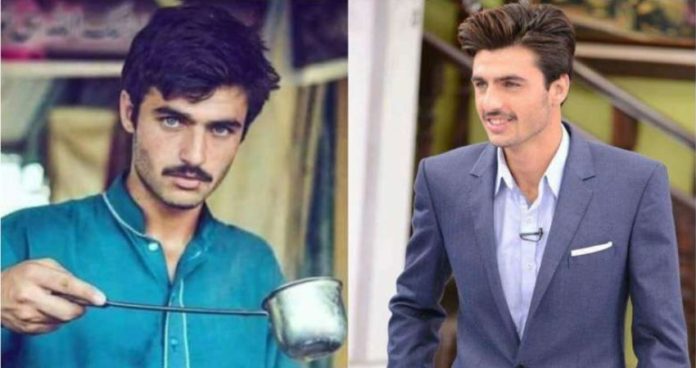 It was during the autumn of 2016 when a blue-eyed Chaiwala took social media by storm with his charming looks. Folks couldn’t seem to get over the fact that Arshad Khan, who works at a tea stall in Islamabad could be this much beautiful. The man went instantly viral on Indo-Pak social media scene and his fame did raise his stature from a Chaiwala to a career in showbiz.

Later Arshad went on to bag work as a model in commercials and music videos. The tea-seller turned actor also reportedly signed for some major projects in the showbiz industry including films. After appearing in a couple of fashion shows, videos and commercials Arshad disappeared from the scene not leaving so many people curious about his whereabouts.

Arshad Chaiwala Back on Tea Stall

Contrary to the expectations Arshad Khan has not been able to make a big name in the showbiz industry. The social media sensation has resurfaced on the scene, once again selling tea but this time on a different tea stall.

Being back on the tea stall doesn’t mean that Chiawala will not work in the showbiz industry. While giving an interview in a morning show Arshad revealed that he was still working on a couple of acting and modeling projects. He also expressed that making chai was part of his identity so he was working at Dhaba once again because he probably didn’t want to let it go off.

In his interview, he also told that he planned to redefine the chai selling businesses and looked forward to inaugurating his own chai cafe in Islamabad. Currently, he was employed and not working at his own Dhaba.

Arshad might not become successful in showbiz industry or producers who cashed on his fame might not find him anymore useful but the man indeed has the courage to pursue his goals. It seems that he knows the direction to reach the fulfillment of his dreams.