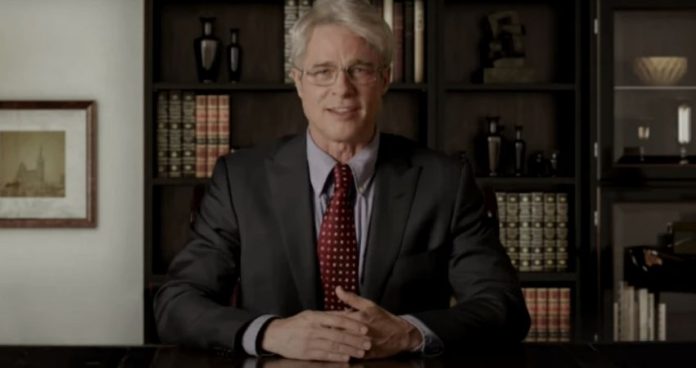 The acclaimed Hollywood actor played the role of Dr. Anthony Fauci the Director of the National Institute of Allergy and Infectious Disease in the second stay-at-home edition of SNL.

Saturday Night Live (SNL) is a late night comedy-show full of laughter and surprises  running since 1975. Due to coronavirus pandemic SNL is producing stay-at-home series.

Brad Pitt delivered a monologue of Dr’s notorious raspy voice and hand gesture. Pitt as Fauci tried to clear some of the comments made by President of United States Donald Trump about vaccines. POTUS has stated that it was coming “relatively soon”. Brad opined that if you have told your friend relatively soon and show up a year later it is going to piss your friend off relatively. Regarding Trump’s statement “everyone” has access to test he clarified that almost no one. As far the Trump’s claims of injecting disinfectant and use of UV light are concerned Brad as Fauci was speechless and then hid his face behind his hands despite the fact that it was dangerous to touch the face with hands in these circumstances.

Brad Pitt wraped-up the show on a sincere note and expressd his gratitude to Dr. Anthony Fauci, medical workers, frontline workers and their families.

This is not the first time that Brad Pitt has given a surprise appearance on Saturday Night Live.  Well, this time he debuted as Dr. Anthony Fauci and fans on social media like his character monologue. He recently also received praise on his acting in once upon a time in Hollywood where he joined Leonardo de Caprio.

Brad Pitt as Dr. Anthony Fauci in SNL is being considered as an award winning performance.

Folks liked the Brad Pitt as Dr. Anthony Fauci and gave the remarks of its being the best opening of the show. They also congratulated the star for genuinely perfect opening segment