Bushra Ansari Wishes Death Upon Reviewer for Criticizing Her Drama 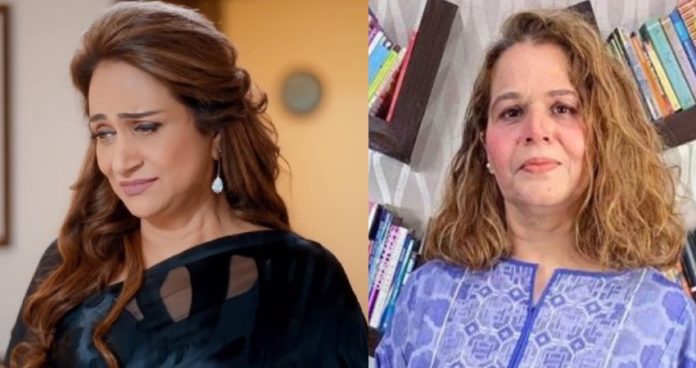 Recently a Pakistani drama veteran Bushra Ansari got offended by a funny review of her home production Zebaish. She slammed Punjabi reviewer Lubna Faryad AKA Amma who is famous for her brutal but funny reviews in a typical Punjabi style. Lubna is a part of a beloved Youtube show “Amma TV Aur Main” by Galaxy Lollywood.

This show involves Lubna’s appearance with her son, where they joke about how Pakistani Dramas are being written. In one of the latest episodes, Amma reviewed a drama written by Bushra Ansari and made fun of the character and acting of Zara Noor Abbas. Ansari snapped after hearing the review on her niece and posted rude remarks that angered the entire country.

What Did Bushra Ansari Say To Amma?

Ansari called Amma a cheap low-class person who was only capable of commenting rubbish. She claimed that such people didn’t know anything about this field. She also stated that she couldn’t believe how people can watch someone so “paindoo” (a stereotypical slur). She insinuated that most people do cheap commentary like this and it does nothing but hurt the feelings of those who do hard work. Finally, she attributed such people with “coronas in our lives” and prayed for their elimination.

Viewers were extremely disappointed by Ansari’s response. Most people actually enjoyed the review which was entirely accurate. People are furious with Ansari for using rude language with a loveable character like Amma. According to the majority, Pakistani drama Zebaish deserved much harsh criticism, this one was just funny.

Viewers loved how Amma performed mimicry of Zara Noor Abbas’s character in Zebaish. Zara’s acting is not widely appreciated by Pakistani drama fans. Amma represents a wide range of drama viewers who agreed with her review.

Why A Lifelong Comedian Couldn’t Bear A Joke

Many have questioned Ansari’s professionalism after this incident. She gained fame due to working in comedy dramas and films. She has also made a huge contribution to Pakistan’s entertainment industry through her acting and singing talent for decades. Given her resume, it was illogical for her to get offended by such a harmful performance

In recent years she became extremely popular among the younger generation for playing a Punjabi character Saima Chaudhry in Annie Ki Ayegi Barat. Those who remember that character are pretty much confused about her comments for Amma.

Then people figured out what could be the reason for those unnecessarily rude remarks. They think Bushra Ansari just couldn’t digest the fact that her writing was being heavily disliked and criticized.

This user shared some cast members of Zebaish who belong to Ansari’s family. Many have argued that the name of this drama would have been Bushra Ansari’s Family Show instead of Zebaish. It is widely believed that Ansari is one of the flag bearers of Nepotism in the drama industry that keeps promoting the kids of veteran artists instead of other talented artists.

Those who never got any good vibes from the actress also came forward. They found her like a self-obsessed and thought her response to Amma childish and immature.

Some are cursed Ansari’s whole family because of her unacceptable remarks against a widely loved reviewer. They are shocked to see such an acclaimed actress unable to handle criticism with grace.

Some used even worse language than the one Bushra Ansari used for Amma. They were enraged by Ansari’s lazy writing, casting most of her family members in key roles, and then wishing people to die if they disliked her drama.