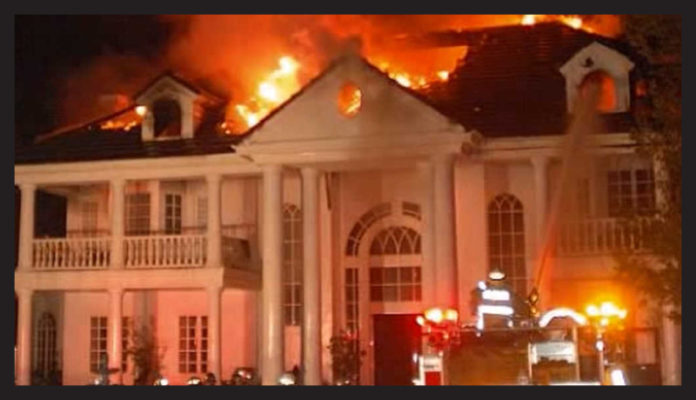 The recent California wildfires, one of the worst consequences of climate change have left almost 42 dead, reportedly. The fires have almost burnt down an area of almost 45,000 hectares including luxury homes and vehicles. The paradise inferno also burnt down celebrity homes and lefts many of them affected.

The celebrities like Miley Cyrus and Gerard Butler completely lost their homes in California fires.

In a tweet Miley told that she along with her fiance Liam Hemsworth evacuated the house but they lost to fire.

Completely devestated by the fires affecting my community. I am one of the lucky ones. My animals and LOVE OF MY LIFE made it out safely & that’s all that matters right now. My house no longer stands but the memories shared with family & friends stand strong. I am grateful for

all I have left. Sending so much love and gratitude to the firefighters and LA country Sheriff’s department! If you are interested in getting involved see next tweet….
Donate $ , Time , Supplies
I love you more than ever , Miley

Hollywood actor and producer Gerard Butler also lost his home in Malibu to California wildfires. He also shared the pictures of burnt home on Instagram and asked people to make donations to help the victims.

The blurred line singer April Love Geary also posted the pictures of sky rising dense smog rising from the ashes. In her Instagram post she also revealed that her house in Malibu had been destroyed by the wildfire.

Celebrities Who Evacuated Their Houses

California is hub of popular faces of Hollywood film industry. It was unlikely for celebrities to not get affected by this natural disaster as they had homes in the area of wildfire. While, above mentioned celebrities lost their homes, there were those who also evacuated in time and posted about it on social media.

Reality Tv star Kim Kardashian talked about leaving her home in an Instagram post. She said, “we are all safe and that’s all that matters”.

While majority of the people were safe from California wildfires as they evacuated in time  there were few unfortunate folks who couldn’t escape their fate. They were either not able to flee the fastly approaching blazes or couldn’t evacuate their homes timely. Firefighters are still busy in containing and extinguishing the fire while a considerable area has already faced damage.