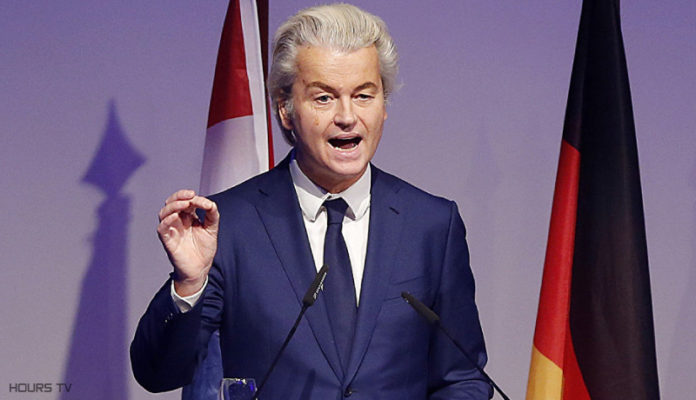 In a written statement Wilders said, “To avoid the risk of victim of Islamic violence, I have decided cartoon contest not to go ahead.”

Blasphemous Cartoon Contest in the Netherlands by Geert Wilders

Geert Wilders is known in the world for his anti-Islam rhetoric which is offensive enough to hurt the sentiments of millions of Muslims. The Netherlands government doesn’t ban Wilders from voicing his opinions due to a country’s freedom of speech laws.

Talking about the Wilders’ controversial caricature contest depicting Holy Prophet (PBUH) Netherlands Prime Minister Mark Rutte reportedly said, “His aim is not to have a debate about Islam. He aims to be provocative.” But Rutte didn’t ask him for cancellation of the contest due to freedom of speech laws of the country.

Geert’s blasphemous cartoon contest was to open in November. The caricature competition that many were defending in the name of freedom of expression was no less than a hate speech. It ran a wave of anger among Muslims.

In Pakistans thousands of members of TLP (Tehreek-e-Labaik Pakistan), started marching towards Islamabad from Lahore to protest against the blasphemous contest. TLP which is lead by a religious cleric Khadim Hussain Rizvi won almost 2 million votes in General Elections 2018.

Apart from the supporters of the right-wing political party, there was a rage of fury among other citizens too. People were sharing messages via social media and urging others to boycott the products of Netherlands origin. Pakistan’s foreign minister Shah Mehmood Qureshi and Prime Minister Imran Khan had also condemned the caricature and demanded Muslim world to take action against it.

How Blasphemous was the Contest

In Islam, it is forbidden to draw pictures or images of the Holy Prophet (PBUH), let alone caricatures or cartoons. So, any such thing which is done with a purpose of mocking the beloved and an esteemed personality is not only offensive but also provocative and is blasphemy. According to the laws of Pakistan who commits Blasphemy against Prophet Muhammad (PBUH) deserves the capital punishment.

While people in Pakistan were relieved that Geert Wilders had canceled the contest they were also debating on whether threatening Wilders was a right way to protest against what he did. Many people think that reacting violently would help Wilders strengthen its case as it would dish out a wrong image of the ‘religion of peace. And, many people opined that what Wilders did was also an extremism an attempt of hate mongering. So, the man was not going to understand the language of peace.