Gully Boy Teaser is Out Revealing A Versatile Ranveer Singh 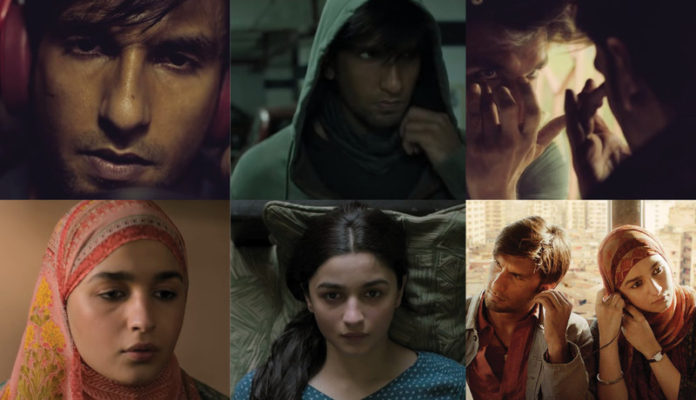 Ranveer Singh and Alia Bhatt starrer Gully Boy’s teaser is out and it looks awesome, particularly for Ranveer fans who will get to see their favorite star in the role of a singer. In fact, Gully Boy teaser features a song Asli Hip Hop with Ranveer’s own voice in the backdrop and it seems enough to dramatize the first look.

Gully Boy teaser shows Alia Bhatt, Ranveer Singh, and Kalki Koechlin in lead roles. The story is reportedly based on the life of a rapper Divine from Mumbai, played by Ranveer as Murad. Alia is playing the role of Ranveer’s love interest Safeena. Not much is known about Kalki’s role in the film yet. The film is directed by Zoya Akhtar and offers a promising story ahead; at least this is what appears from the first look.

Gully Boy trailer will release on January 9 and it will hit cinemas on February 14, 2019.

A Versatile Ranveer and Alia Bhatt

Earlier in 2018 Alia Bhatt’s pictures in hijab went viral from the sets of Gully Boy. And this made fans believe how much Alia was capable of playing versatile roles. After all, her role in Gully Boy seems entirely different from one she played in her debut film Student of the Year.

Alia Bhatt got huge applause on her role in Raazi is getting the appreciation for her de-glam look in Gully Boy.

Gully Boy teaser has also put a seal on the versatility of Ranveer Singh. First Band Baja Barat then period movies like Baji Rao Mastani and Padmavat and now playing Gully Boy after nailing the role of a cop in Simmba proves Ranveer a real gem.

The teaser also had a good response from Twitteratie.

They are right to say. What time to be Ranveer Singh…

It seems a really good time for Ranveer Singh who gave successful films one after the other and also got married to Deepika Pedukone. The actor has really got some solid reasons to be in limelight.

Few scenes in the trailer are unlikely to not inspire memes. Like this one below.

Gully Boy is likely to be a good start of 2019 for Ranveer and Alia who are performing quite well on the last couple of years. The film is also expected to bring a fresh story to Bollywood.