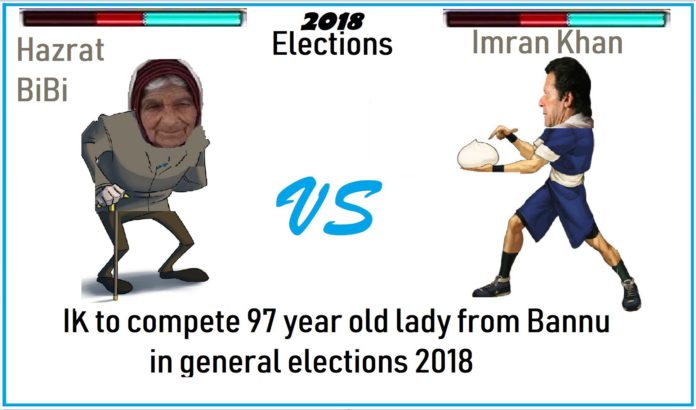 It is the election season in Pakistan and media is rife with breaking news about political parties giving tickets, fall out between the party members and unexpected candidates filing the nomination papers against famous leaders. This time 97 years old Hazrat Bibi from Bannu has made headlines for contesting Polls against Imran Khan.

Who is the 97-Years Old Hazrat Bibi?

Hazrat Bibi who is only three years away from reaching the 100 years old mark baffled the media after she submitted nomination papers for the NA-35 constituency for general elections which are going to be held on July 25. She came to file her nomination papers while clad in a white dress.

She has also filed the nomination papers for PK-89. This old lady has reportedly contested elections at least five times in past. She once won the UC elections during the local bodies polls.

The enthusiasm of Hazrat Bibi

According to media reports, Hazrat Bibi is contesting elections as she wants to work for the betterment of society and the noble cause of girls’ education in underprivileged communities.

Whether Hazrat Bibi will win elections or not and whether people want to see her in assembly is the question of future. But, at the moment it is the enthusiasm of Hazrat Bibi which is winning the hearts. Her confidence and passion for leading the people and making a difference to the community while being in a crucial position are worth noticing.

The case of Hazrat Bibi deserved more prominence than news about Shahrukh Khan’s cousin contesting for elections from KPK. And, here are the reasons.

Well, it is everyone’s right to do what he/she wants. But, when it comes to contesting for the polls then people are divided mainly; there are those who favor old age people who have learned much from the past and are experienced in running the government. And, then there are those who support the youth as they want to see new ideas that can make a real difference.

In case of Hazrat Bibi, people might not like an idea of sending a senior citizen in the assembly, because they suspect her to be incapable of running the affairs according to the issues that youth of the modern time is facing. The fact that Hazrat Bibi has dared to contest elections in such an old age that too against a powerful candidate confirms her passion and enthusiasm. And, her courage is at least a lesson for the sad and disappointed youth that there is nothing like a limitation. One must have passion and desire to make a change despite age constraints. Yes, the woman is indeed a motivation for young generations.