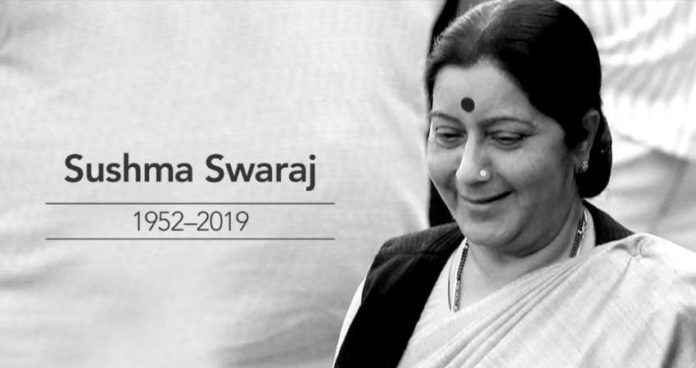 The whole of India is grieving over the passing of one of its favorite female politicians and ex-foreign minister Sushma Swaraj. The 67-year-old was highly respected by her colleagues and the Indian public for oratory skills.

Who Was Sushma Swaraj

Sushma Swaraj started her career in the 1970s with Akhil Bharatiya Vidyarthi Parishad before that she was a Supreme Court Lawyer. In 1997 she became the youngest cabinet minister of the Indian state of Haryana and served as the fifth Chief Minister of Delhi for a short duration 1998. Doubt, the best-loved politician by the wall street journal Ms. Sushma, was the second female to serve India as its foreign minister. Before her, Indira Gandhi was the only Indian female who served Indian in such an important role.

She joined the BJP in 1977 and went on to become one of the most senior party members. Prime Minister Narinder Modi held her in high regard and was heard broken when he found out about her sudden death that occurred due to a cardiac arrest.

Reactions of the Indian Public

Celebrities and politicians from all over India are sending prayers to her family. Her death signifies an end to one of the greatest eras.

Regardless of whatever the situation was, she was always there to help her fellow Indians whenever where they needed to be helped. She made sure that people could reach her with ease, whether it was day or night.

Inspired Others to Be Great

Many Indians looked to her as a role model. They were inspired by her work ethics and sheer determination

Leaders from all over the world are sending their condolences to the family of the ex-foreign minister and asking them to remain strong.