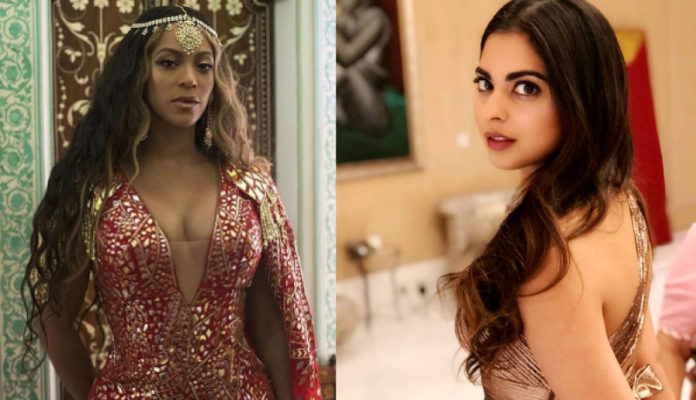 India’s city of Lakes, Udaipur was not silent on the night of Saturday, December 8 as dozens of chartered flights landed at the airport of the small Rajasthan town. The incomers reportedly included Hillary Clinton, John Kerry and music sensation Beyonce and Bollywood biggies who came to attend Isha Ambani’s pre-wedding sangeet.

Isha who is also the member of Board of Directors of Jio Reliance is going to tie  knot with Anand Piramal, a business tycoon and her childhood friend.

India’s richest man Mukesh Ambani’s daughter pre-wedding festivity was exactly a ceremony that one could have expected from someone of Ambani’s stature.

The function brought some political figures closer to bollywood celebs. As here we see how Vidya Balan asked Simriti Irani to introduce her to Hillary Clinton and clicked a picture with her.

Shahrukh Khan who is also brand ambassador of Jio 4G services hosted the ceremony along with his wife Gauri Khan. SRK also rocked the stage with his sizzling dance performance on bollywood songs, something that made must have made people forget his Virusha wedding performance.

But it was Aamir Khan and Shahrukh Khan sharing the stage that rocked the show.

It was Beyonce’s concert at Sangeet ceremony that stole the show. The singer looked gorgeous in red dress embellished with shiny stones.

Here is another video of some Kapoors and Bachchans shaking led to bollywood songs on the eve of Anita Ambani pre-sangeet event.

According to media reports Hillary Clinton who was the guest of Mukesh Ambani and Nita Ambani recieved a warm welcom from her hosts. Former first lady of the United States and the candidate for the President of the United States donned an Indian attire and reportedly danced to the bhangra tunes along with Ambani family and senator John Kerry.

Apart from celebs and politicians, several entertainment journalists and bloggers also made their way to Udaipur where they documented the super royal sangeet function of Isha Ambani and let the world know how the city of lakes reverberated with the sounds of music and shone with the countless stars that were on Earth that night.

Bollywood Celebrity Couples Who Married One After the Other