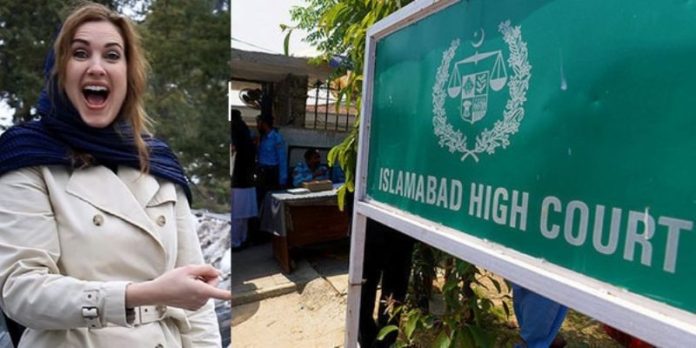 The Islamabad High Court (IHC) denied the order of Interior Ministry (MoI) to deport US citizen Cynthia Ritchie. MoI had rejected her Visa extension on 2nd September, which she challenged in high court on the 5th.

During the hearing today, Cynthia’s counsel claimed that MoI did not cite any particular reason for not extending her Visa thus she must be given her right. Court corrected the lawyers that visa was a privilege and not a right, which is why it can get rejected without any reason.

Cynthia Ritchie Speaks In her Defense

In her defense, Ritchie stated that her visa was rejected despite submitting all required documents. MoI also ordered her to leave Pakistan within 15 days after rejecting her visa extension. She claimed that MoI was under pressure from PPP (Pakistan Peoples Party). The blogger labeled as Pakistani establishment’s tout has accused PPP leader Rehman Malik of sexually assaulting her.

She accused Rehman Malik of raping her and two other high-profile ministers of molestation a few years back when PPP was in government.  According to Ritchie, these allegations were the motivation behind MoI’s order to deport her.

IHC was not convinced with the MoI’s explanation in Ritchie’s case. The accused rapist Rahman Malik claimed that Cynthia’s allegations were false. The paper suggested that Cynthia had not mentioned the details of the ordeal for which it should not be constituted.

Cynthia shared the rest of the pages of Rehman Malik’s petition on social media. IHC has prevented MoI from attempting to deport Cynthia after reading the document reportedly.

Till Then The Court Is Adjourned

IHC also ordered Cynthia to submit all her allegations in a documented form before the next hearing. MoI responded to IHC’s decision that Cynthia’s visa was extended twice in 2018 and 2019 against the law. Both times the US citizen and communications specialist applied for a work visa but was given a business visa instead. Reportedly, It was against the official visa policy as Cynthia’s company was not registered in Pakistan.

Earlier ministry of interior had told Islamabad High Court that Cynthia was working on projects in KP in collaboration with ISPR.

It is to be noted that US bloggers face serious criticism from civil society for her ruthless opinions on matters pertaining to Pakistan.

American Filmmaker Cynthia Ritchie Gets Trolled for Her Twitter Meltdown