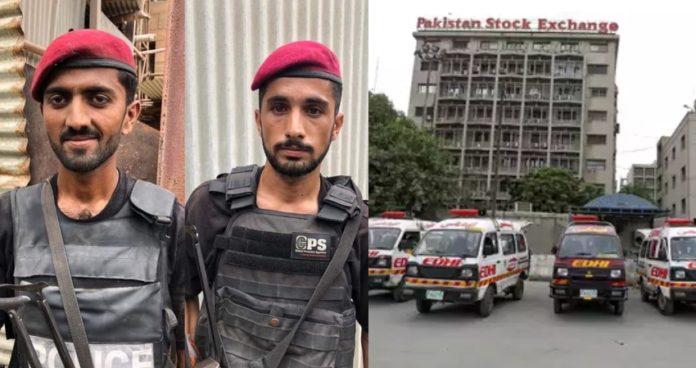 Four terrorists attacked Karachi Stock Exchange (KSE) in Chundrigar Road aka the Wall Street of Pakistan. Reportedly, 11 people died before all assailants were killed by the Rapid Response Force (RRF). According to media reports, the attackers were trying to get in the trading floor of the stock exchange building.

Balochistan Liberation Army (BLA) claimed the responsibility of this ambitious attack. BLA is notorious for many assasination attempts and suicide bombings in the US, the UK, and Pakistan. A police sub-inspector and 4 security guards were killed in action.

What Happened During Attack On Karachi Stock Exchange

Terrorists arrived in a silver Toyota Corolla and were stopped at the gates by police. They opened fire and hurled a grenade at the security checkpoint outside the KSE. The security forces successfully defended the building and after killing all the attackers, recovered weapons and equipment from them.

One policeman explains how he helped in taking down the terrorists. After killing one, he shot the other one multiple times and as he was about to reach for his secondary weapon, the policeman immediately shot him in the head.

Attackers were heavily armed, reportedly 7 security officials were wounded and taken to hospital for treatment. Most people inside the building hid themselves in locked rooms while others were evacuated from the back door. Trading resumed normally after the shootout.

Social Media Reactions On The Shootout

People appreciated the Sindh police for defeating the terrorists and stopping them from causing any harm to the Karachi Stock Exchange.

It was criticized that the names of the policemen must not be made public due to the security threat but many were confident that these two boys can take care of themselves. Plus, people also needed a name to send best wishes and prayers.

Unusual lack of reporting and social media noise confused people about a lot of things. They were forced to connect the dots and figured out that India was more interested in this news than Pakistani journalists, and politicians who are often seen tweeting aggressively about less critical affairs.

The attack might be supported by the rival country as usual but this user looked at the bright side. The RRF was able to sabotage the strategic plan within an hour.

The user implied that this is how India tries to protect itself by sabotaging the peace in the region. He added that India had always used all methods of warfare to destabilize Pakistan economically and politically.

People appreciated such a quick response and also remembered the officials who laid their life in order to protect the stock exchange at a time when the economy was already struggling.