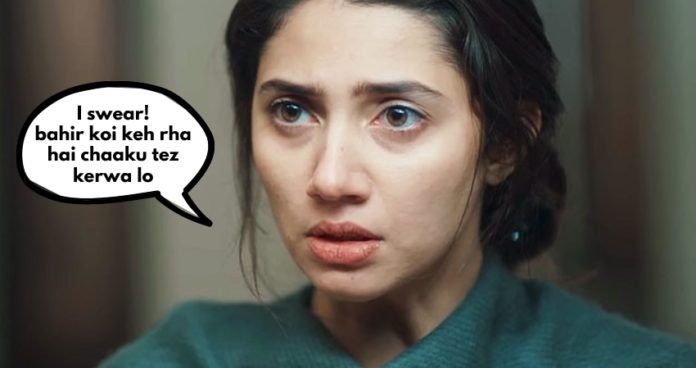 Fans and media people love to take a swipe at Mahira Khan for being adorably naive. There is a video circling on the internet which might take a viral form. Although the reaction from the public is mild, it is divided between those who are criticizing the actress and those who are defending her.

Here is the video for people to decide if it raises any red flags.

Mahira Khan was telling a story to a friend when she was interrupted by an external sound of an announcement. At first, she thought it was the usual COVID-19 stay at home announcement but the realization made her crack up. There was a street vendor who was a smith and used a loudspeaker to find if anybody wanted to have their knives sharpened.

Was Mahira Khan Laughing at Poor?

Viewers have created many interesting theories as to why Mahira Khan was so surprised at the street vendor as it was a common occurrence in Pakistan. Many poor people use this method to sell their wares in different neighborhoods. However, Mahira is one of the most beautiful women in the world who often remains under the public’s attention. She is often criticized by self-proclaimed nationalists for being friends with Indian actors and often accused of overacting in her films and shows.

Mahira Khan has been called out on so many things but the fact that she did not know about how ordinary street vendors operate in this country was hilarious for many people. One user pulled her leg by repeating the same line she used to mention the external sound.

Social Media Picking On Mahira Khan For Being Naive

It is quite unusual for a person who lives in Pakistan to not be familiar with sounds like “chaku tez kara lo”, “panday kali kara lo”,”pressure cooker diyan muthan lawa lo”, “sabzi wala” “gutter safai wala” etc. These are the people that make lives easier at homes by roaming around in the streets as a reminder that the help is available and thus earn their livelihood by working hard.

When Mahira could not guess what it was, it led people to conclude that she was actually making fun of the method used by the street vendor.

This user suggests that when a person reaches a certain celebrity level, then he may develop some superficial feelings that take them away from first world problems.

To refute this trend set by celebrities, one critic recommends going back to the desi roots before they are strategically contaminated.

Was It Descrimination from Mahira’s Side?

She has been labeled a burger by some viewers for staying in her bubble rather than displaying care for people. Mahira might have been inconsiderate and if that is so then it really is one of those things that expose the socio-cultural divide in Pakistan on the basis of social classes.

Even if Mahira Khan did not mean to insult anyone, the elite class happens to treat street vendors in a discriminatory way. The manner of looking at them and socialising with them is very different from how elites treat each other. This is why people may despise Mahira Khan for apparently behaving in a way that might be deemed discriminatory..

This viewer has defended Mahira by explaining that it is fine to remain light-hearted if no one is getting hurt. He admits to having a similar nature of laughing at such calls of street vendors from a young age.

It does not mean that she is making fun of the street vendor but their methods and interesting calls could be a source of happiness for some people. Mahira may need some educators but she definitely doesn’t need intolerance and unnecessary heat. It is still not clear what the video is all about and what is the explanation by Mahira on her remarks on the street vendor.

The video could also be a pretext of any kind of her project. Just a few months back one such video of Ali Rehman Khan using his privilege to shout at salesman of a fast-food restaurant had emerged. But later, it turned out that it was deliberate and just meant to spread awareness.