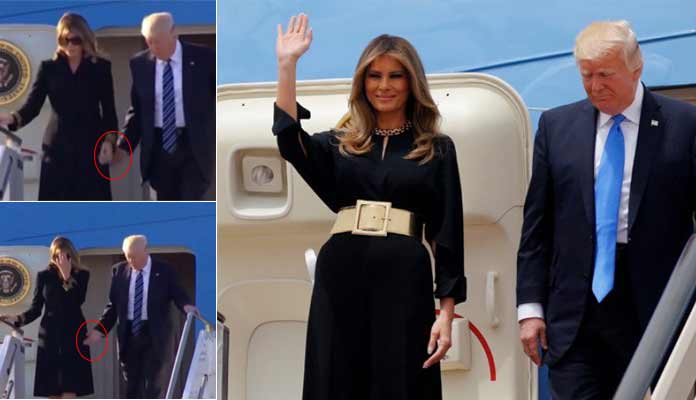 We were all talking about that first foreign trip of Donald Trump abroad. The only things on minds of political analysts were discussion on world affairs, Middle East peace process, Saudi Arabia, and NATO. Who would have thought of this Melania Donald row becoming bigger with time?

Besides anything else, if this Trump foreign trip provides any insights, they are into his married life. The apparent rejection of Melania to hold the US President’s hand has something beyond the obvious. The Melania Donald row is making headlines all over the world.

Do you think it all started with this foreign trip? Well, remember when the first time Donald Trump took the oath. At that time the facial expressions of Melania were that of an unhappy First Lady of United States (FLOTUS). It was the first time people came to know there was something wrong with this couple.

There were all crazy kinds of assessments on Melania Trump row. Many exaggerated that Trump may have held Melania a hostage. The psychologists said that she did marry Trump for the wealth. But she did not get the kind of person she probably wanted.

It All Started in Israel

Donald Trump did have contacts with the Russians as per the former FBI Director. However, when it comes to communicating with his wife, Trump has a lot of work to do. When in Saudi Arabia, all seemed to be working fine for both of them. Melania Trump appeared to be having fun with the Saudis without noticeable rift between the two.

No Head Covering in Saudi Arabia but Vatican 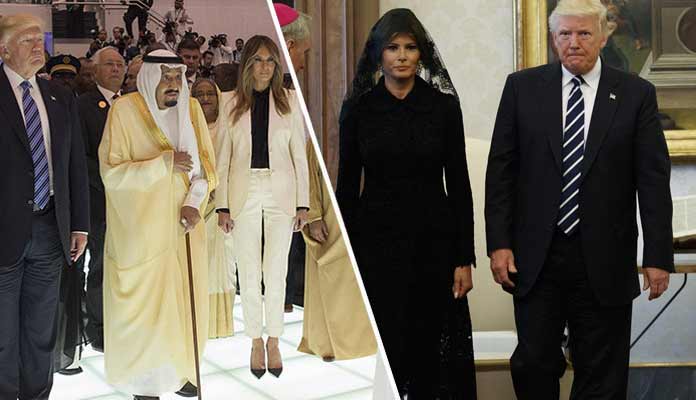 Melania Trump did not forget to follow the Vatican protocol. To ensure proper dressing she chose to wear the head covering while visiting the Pope. Similarly, Ivanka Trump wore a somewhat similar outfit that had a bigger veil.

Saudi Arabia, on the contrary, is a strictly conservative Muslim country. There are strict sharia laws in the country to follow. Despite not abiding by the local customs, the local press did praise Melania Trump. The media reported that she did respect Saudi Arabia’s culture.

There was no apparent logic behind this choice. Some suggest Melania may not have got any such request from Saudi Arabia to cover her head. On the contrary, she may have had to follow the Vatican protocol in her dress code.

The Wedding of Melania and Donald Trump

Back in 2005, Melania and Donald Trump got wed in a high-profile ceremony. Many at the time recall it to be a million-dollar wedding. Several media outlets gave coverage to the Melania Knauss and Donald J Trump wedding.

Around 350 guests including Bill and Hillary Clinton, Heidi Klum, Mort Zuckerman, Arnold Schwarzenegger, and Barbara Walters attended the wedding. The new Melania Donald row may suggest their marriage be on the rocks. However, time will tell how this decade old couple gets along in the future.