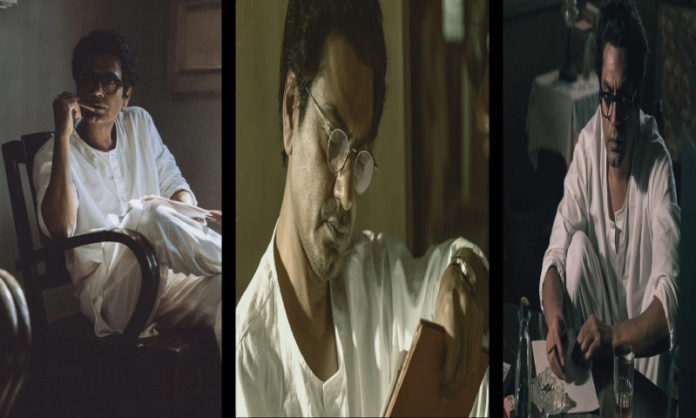 Trailer of upcoming Bollywood movie Manto is out now. The movie is based on Sub-Continent’s great Urdu author and writer Saadat Hassan Manto. Famous Bollywood actor Nawazudin Siddiqui has played the character of Manto. The film shows seven years of his life, from 1946 to 1952.

The trailer starts with Manto justifying himself of his writings in the court. The scene was in reference to the trials he faced for the reason of his publications.

Additionally, his compassion and sympathy towards women is also shown in one of the scenes. Women, who want to work and be independent but not through disrespectable and wrong ways; however, are pushed by men into exposing their bodies so as to fulfill the requirements of their work. His feelings of strong revulsion are clearly depicted in the scene when Rishi Kapoor’s character asks a young actress to remove her clothes to bring off the demand of the role.

He was also shown drinking and smoking while writing his controversial thoughts and perceptions about the illnesses of society.

Further, in another scene, he is confident that his second child will be born in free India, but was caught in the unexpected circumstances of Partition.

Even after being taunted by his wife for the hunger his writings are costing, Manto is shown continuing his work uninterruptedly.

Sadaat Hassan Manto was an Urdu playwriter and author. He was the most controversial writer of his time and was expert in exposing the bitter truths of the society. He depicted the harsh realities and evilness that inhabit the human minds. His writings were considered unethical and immoral because they were too difficult to consume for ordinary people. He responded to the criticism he received stating, “My stories are mirrors for society to see itself”, which is the opening dialogue of the trailer too.

He faced six trials for indecency, thrice in British India and thrice in Pakistan.

His famous and well-known writings are his stories about the time of partition of India.

Nawazuddin Siddiqui is one of the well-known actors of Hindi-cinema. He is placed in the category of those actors who can mould themselves according to any role they are given. Siddiqui’s previous performances show exactly how talented he is as an actor.

Playing the role of Manto is a very big opportunity for Siddiqui to further enhance his acting skills and prove himself as one of the most refined actors.

Manto’s trailer has reached above 4 million views. The film was also presented at Cannes Film Festival earlier this year.