This Guy’s Idea of Pakistani Superheroes Is Simply Awesome 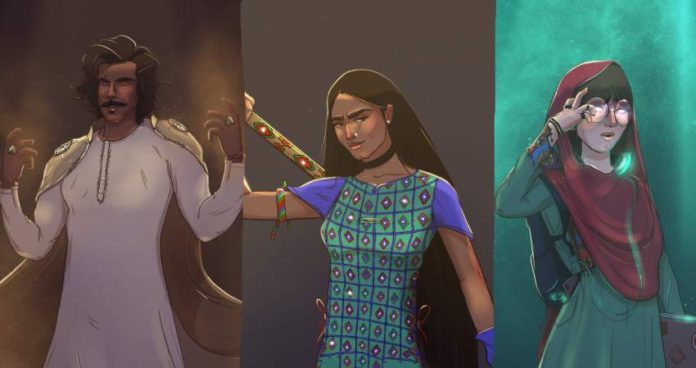 It’s time to take a break from obsessing over DC and Marvel’s characters as a fresh idea of Pakistani superheroes is likely to go popular among desi folks. @UmairNajeebKhan used his creativity to present regional superheroes from everyday life. The best part about Umair’s comic characters is that they not only carry with them mesmerizing traits of a fantasy world but also seem too relatable for being one of the commoners found in length and breadth of Pakistan.

As apparent from the Twitter post, umair’s project seems in the initial stages. Till now he has introduced the audience to three Pakistani superheroes that include Marvi, Sofyan, and, Bazira.

The interesting aspect of these characters is that they represent the diverse culture of Pakistan and their portrayal gives a message of inclusiveness.

The marvelous work that these Pakistani superheroes have been accomplishing is indeed a need of the Hour for the country.

Who Are They All About?

As Umair explains the characters in his Twitter thread Bariza is a tech-savvy teenager from Swat in KPK area who can foresee the future and hence plan ahead of the things.

The warrior Marvi who hails from Sindh is a teacher by day a vigilante by night and famous for her combat skills. Her character can easily be a female protagonist in some popular action-packed video game.

The third superhero is Sofyan who is a Nawab, a savior and also a time traveler.

Something that Really Deserves an Appreciation

It is indeed heartening to see Pakistani youth doing wonders in their fields and using their talents for some fruitful purpose that can make a change towards society. Not a long ago Pakistani artist Samar Minallah who used truck art to spread awareness about girls education made the news. And, now another youngster is using his skill to represent the aspirations of his fellow citizens through these magical characters who belong to all and represent all not in the form of their appearance but also in the form of their work.

No wonders that people were applauding Umair for presenting such dynamic Pakistani superheroes.