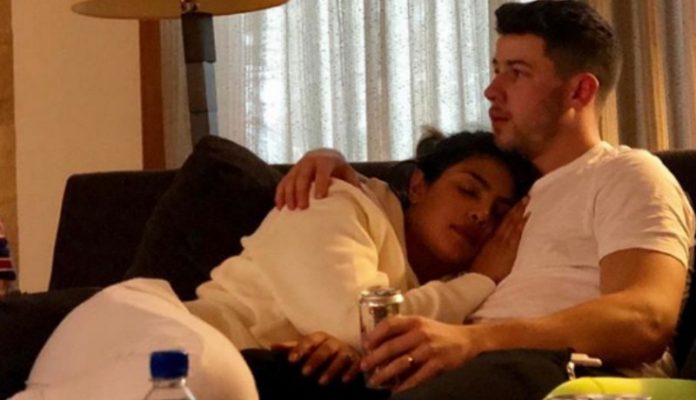 Desi girl, Priyanka Chopra remains center of discussion on social media for several reasons. Recently it was her picture with husband Nick Jonas that went viral on social media and left people asking several questions. Now when Priyanka has revealed the backdrop of her picture, it turns out to be just another viral super bowl meme that non-Americans can relate the most.

First just have a look at the Piggy Chops asleep on Nick Jonas chest which is getting memefied.

How It Became A Super Bowl Meme

From the past few days, it was impossible for social media users to not scroll down their news feeds without coming across any super bowl meme. Only poor half time performance by Maroon-5 gave rise to satirical criticism.

But, the case was Priyanka Chopra and Nick Jonas cute picture from their home was different. Earlier, there was no mention of the Super Bowl and all the people asked was how the celebrity couple allowed a photographer to invade their privacy or why they were willingly making their such intimate moments so public.

Who Was the Photographer?

So, the picture’s life as a meme began when Priyanka revealed about the photographer. While responding to so many questions on social media and resulting memes, told folks that picture was taken by her cousin Divya Jyoti who clicked the couple while watching Super Bowl.

But fans on Twitter, were also of opinion that it was useless to pose such question before Priyanka Chopra who was indeed too smart to answer it.

People still couldn’t believe if it was their candid photograph.

A Super Bowl Meme for Non-Americans

All that controversy on being a staged or candid picture apart; it was indeed the best ever picture to come out of a super bowl for non-Americans. The reason is that soccer despite being a popular sports is more about hype. Many people pretend to talk about it or like it because it is cool. And, it shows that while non-Americans might be watching it due to all that hype, they may have little to no interest in it. So, even if Priyanka Chopra was watching, the Super Bowl she thought it better to fall asleep rather than concentrating on what was going on.

Desi girl is too obsessed with her husband. As recently in Jimmy Fallen’s show where she revealed the reason behind adopting Jonas names. She told the host for always wanting to add the Nick’s name to her.

Priyanka Chopra got married to Nick Jonas in a lavish wedding ceremony on December 1, 2018. The couple then celebrated Christmas in the US with Nick’s family.