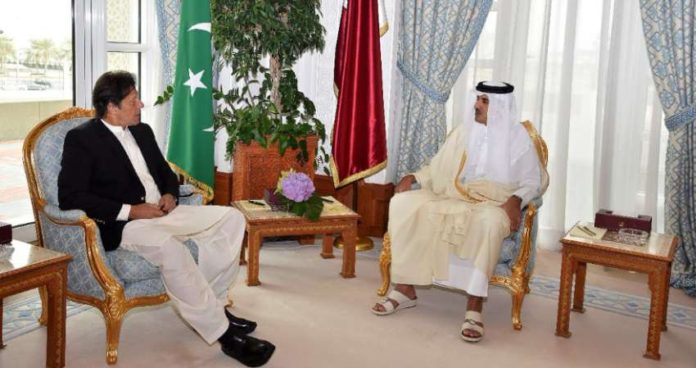 After Saudi Arabia, Qatar is ready to invest $3 billion in Pakistan, bringing the total investment up to 9 billion dollars. The Qatari foreign minister while confirming the placement stated that his country was looking forward to strengthening its ties with Pakistan.

Qatar is the fourth Gulf country to step forth to help bail out Pakistan while Prime Minister Imran Khan is trying to tackle the ballooning balance-of-payments crisis being faced by Pakistan. Earlier China gave Pakistan a 4.6 billion dollar in the shape of deposits and fixed commercial loan.

Then Saudi Arab offered Pakistan $3 billion cash deposit and $3.2 billion oil facility on deferred payments. Then UAE also announced a 2 billion dollar loan. The Advisor to Pakistan Prime Minister on Finance Dr. Abdul Hafeez Shaikh through his tweet thanked the Qatari Amir for his investment through one of his tweets

On Sunday Pakistan conferred the visiting Qatari Emir with the ‘Nishan-e-Pakistan,’ the country’s highest civil honor. Apart from increased partnership, both the countries signed multiple MoU’s regarding financial intelligence regarding money laundering and terrorist finances to help combat this problem effectively.

Details Were Not Provided Immediately

The details regarding the investment were not immediately released as it was unclear in what form the deposit will be made to cushion Pakistan’s reserves. The Qatari Amir while talking to the media, expressed a great deal of satisfaction in the way the government was working and said he saw a very bright future of Pakistan.

To further strengthen its economy, Pakistan last month reached an agreement with the international monetary fund for $6 billion dollars.