Sajjan Jindal visited Pakistan without any prior announcement to meet the Prime Minister of Pakistan. He met with the PM at the hill resort of Murree resulting in speculations from all quarters.

There is a lot of talk going on between the political analysts about the reason behind the visit. Some analysts consider Sajjan Jindal visit to Pakistan to facilitate a future meeting between Indian Prime Minister and Pakistani Prime Minister.

Sources who know Sajjan Jindal well claim that he is close to both the Pakistani and Indian Prime Ministers. So political persons consider him as the ideal person to facilitate a meeting between two heads of the states.

On arrival of the Indian business tycoon, Former Foreign Minister Khurshid Kasuri said that it was probably an attempt by India to activate backchannel diplomacy.

Opposition parties in Pakistan did not take a visit of Sajjan Jindal lightly. The PTI moved a resolution in Punjab Assembly showing its concerns over an allegedly “secret” meeting between the PM and the Indian business tycoon.

Here is how Maryam Nawaz Sharif replied to the controversies stirred up by the private news channels in Pakistan. 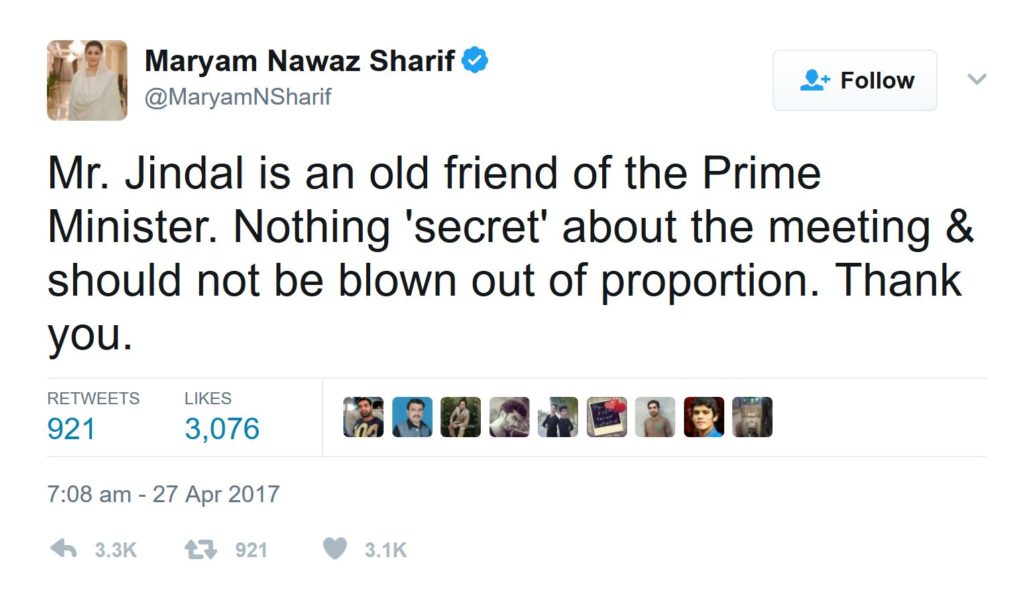 There are many twists and turns speculated by the media. Here are two other potential reasons why Sajjan Jindal came to Pakistan.

Today, authorities are saying that they will consider consular access to Kulbhushan Jadhav based “on merit.” Kulbhushan Jadhav death sentence by the Pakistani military on spying charges is worrying India. Earlier Kulbhushan Jadhav’s mother appealed to Pakistan for his release. The Indian High Commissioner in Islamabad Gautam Bambawale submitted the appeal.

There is a slight possibility that India may have become interested in talks on Kashmir issue. The recent violence and atrocities against the civilians in the Indian occupied Kashmir have not been able to pacify its youth. Despite BJP’s best efforts, there is no peace in the valley. A lot of innocent lives got lost during the protests.

India does not want to talk from the position of weakness because of its newfound relationship with the US. However, it may still be trying to reach Pakistan from the back door to get it out of the troubles.