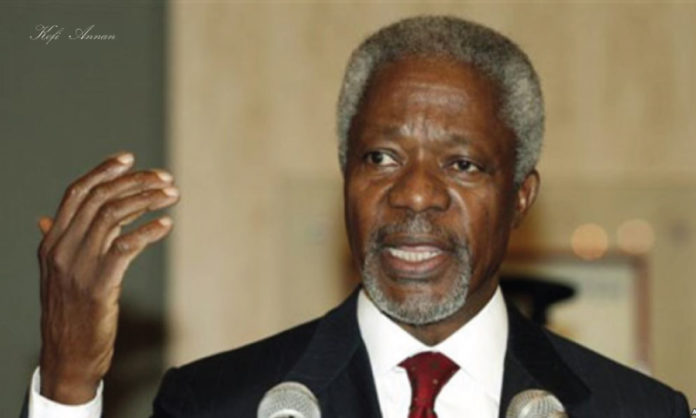 Ghanaian ambassador, Kofi Annan, who served as seventh secretary-general of the United Nations, for 10 years, between 1997 and 2006, dies at the age of 80. Tributes started pouring in from all over the world after the news of former UN chief’s death went viral.

Kofi Annan died at a hospital in the Switzerland capital, Bern, after a short period of illness.

He was awarded Nobel Peace Prize in 2001 for his work and efforts to make the world a  better, organized and peaceful place. He shared Nobel Prize with United Nations.

The official statement released on Twitter by The Kofi Annan Foundation stated that:

It is with immense sadness that the Annan family and the Kofi Annan Foundation announce that Kofi Annan, former Secretary General of the United Nations and Nobel Peace Laureate, passed away peacefully on Saturday 18th August after a short illness… pic.twitter.com/42nGOxmcPZ

The entire world is saddened by the demise of such an undaunted diplomat who set a precedent through his services for humanity.

Today we mourn the loss of a great man, a leader, and a visionary: former @UN Secretary General @KofiAnnan.

A life well lived. A life worth celebrating. pic.twitter.com/3sLmy7VS2p

We are deeply saddened to learn of the passing of @KofiAnnan. Statement by UN Human Rights Chief #Zeid: https://t.co/GKKEuRVCNG pic.twitter.com/M7B2sSC4ol

He was the world’s first black African to work as a top diplomat (General Secretary) in the world biggest organization, United Nations.

As the Secretary-General, Annan improved the UN directorate, worked to fight HIV, especially in Africa and initiated the UN Global Compact. In 2007, after leaving the United Nations, he established the Kofi Annan Foundation to work on International development Afterwards, he served as UN’s special representative for Syria in order to bring a peaceful solution to the conflict. In September 2016, Annan was designated to head a UN commission to examine the Rohingya Crisis.

Who was Kofi Annan ?

Kofi Annan was born in Kumasi, the Gold Coast (now Ghana) on 8 April 1938. Annan joined the United Nations in 1962, as an office holder for World Health Organization (WHO), Geneva office. Afterwards, he continued working at UN for different roles which eventually lead him to becoming UN Secretary General on 13 December 1996 thus making him first UN staff to achieve so. He was re-elected to serve as UN Secretary-General for a second term of 2001 to 2006.