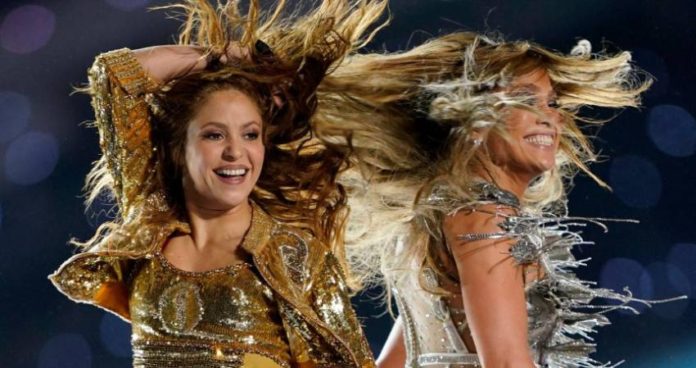 For Americans Super Bowl is a complete entertainment package for it makes them enjoy football, music and food; super bowl 2020 was no exception. This year it was Jennifer Lopez and Shakira’s powerful performance that turned the event on fire. As if JLo and Shakira being on stage together was not enough the meme-worthy tongue wagging stunt pulled by Shakira just left spectators in awe.

This is where she came in front of camera and gave those expressions with a sound which is now breaking the internet.

Those who are wondering what Shakira did on her Super Bowl performance probably don’t know about Waka Waka singer’s Arabic origin. Shakira was born in Colombia to a Labanese father. Her name is Arabic means “Thankful”. Her tongue wagging stunt had much to do with her Lebanese heritage. In Lebanon this is a way to express sentiments, and celebrate or rejoice over something. Such celebrations can be about anything like getting a degree, achieving something big or dancing at weddings.

A Content for Meme from Super Bowl Halftime Performance

In Super Bowl 2019 it was Priyanka Chopra Nick Jonas meme that went viral on social media. Well, this time Shakira has given folks something really interesting. People are seeing their newsfeeds loaded with tongue wagging expressions by users who are also trying to master that celebratory Lebanese sound.

Like, drawing parallels with the celebratory style of Tarzen…

And, this was all over the internet.

The most surprising was how could these two artists be so energetic in their 40s and 50s.

It was surely reminding us of this 73 years old Chinese pole dancer who debunked all the myths of age.

There were just more references of that tongue dancing celebrations.

She was simply winner of the night for these so many reasons.

Hips Don’t Lie Singer was a show stealer not only for one reason.