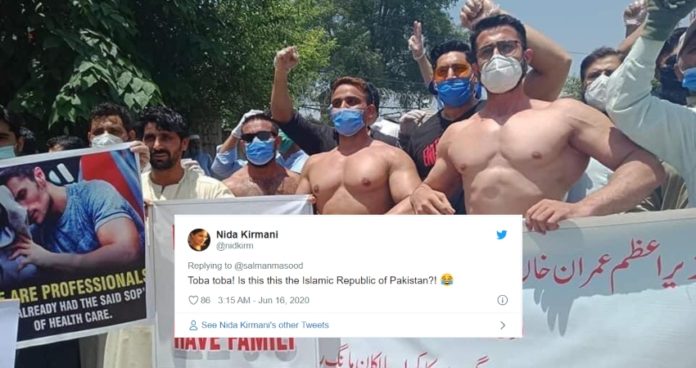 Gym Owners went viral on social media for protesting at the closure of gyms during the COVID-19 outbreak. Protestors were buffed and some of them were shirtless which attracted attention for some different reasons as well.

The protestors wore masks to show that they are following SOPs so they should be allowed to open their facilities. This came as a shock to many, considering the potential health risk of crowding up a dangerously vulnerable place like a gym. Social media users bashed their protest in many different ways.

People Are Reluctant To Support Cause Of Gym Owners

It would have been possible to reopen the gyms if Pakistan wasn’t struck with a global health crisis. It has gotten worse since the government started to lift lockdown in phases.

Are Men Also Getting Inspired By the Women’s Movement?

Women have enjoyed the most about this protest; from the visual treatment to taking revenge for the sabotage most men do at women’s protests.

Female users also withdrew the moral card just like men whenever women stand to fight for their rights.

Some girls just preferred to treat their eyes

Others were wondering if their wax specialist was taking any appointments

It is argued by some that the protests could have easily been done with shirts. Probably these gym owners wanted to show off how strong they are so the officials can be intimidated to take actions quickly.

How They Were Allowed To Protest While Exposing Body Parts?

These shirtless men were able to peacefully protest because women are less likely to become sexual predators or murderers at the sight of male body parts.

So This Is Why, They Can Be Shirtless

For people who are wondering why these gym owners are protesting shirtless then they should remember a once popular phase. This particular phrase caused a series of conflicts like the one between Khalil Ur Rahman Qamar and Marvi Sirmed.

People Showing How Unnecessary Arguments Can Hurt The Purpose Of Protest

Being Safe From The Virus Or Going To The Gym?

Another international visitor arrived at the unusual but attractive post. She suggested that being united against COVID-19 disease is much more important than going to the gym right now.