Everything About the First Super Blood Moon Eclipse of 2019 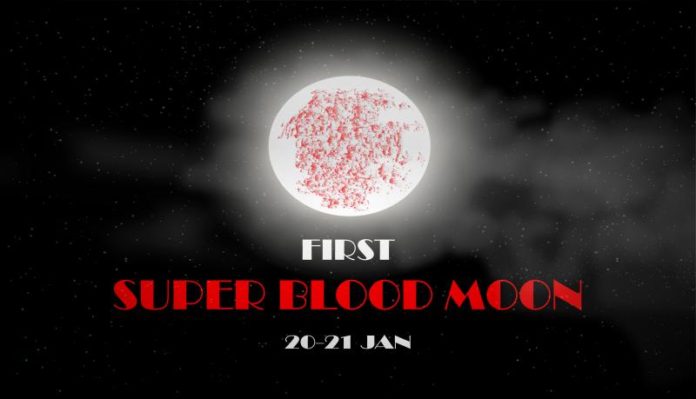 2018 was a year of some spectacular celestial events. The world witnessed two super-moon in the first month. Well, 2019 is a no exception it has got so much for the appeasment of those obsessed with nature’s marvels appearing on the sky. The first worth seeing a spectacle of 2019 will be in the form of Super blood moon or the wolf moon that will show up between January 20 and 21.

All About Super Blood Moon of January 2019

New Year’s Blood moon will be a so called super moon for it will not be as brighter and larger in size as the Blue moon of January 2018. Further, it will be a blood moon lunar eclipse. On this eve the Earth will partially shadow the full moon resulting in the first eclipse of the year. The moon in this situation will appear blood red making it two-in-one treat for onlookers who will get to watch an eclipsed blood moon.

Later that year, in middle of July a partial lunar eclipse will also occur. Folks who dont really feel like seeing these celestial events but believe them to have an impact on their lives are should brace themselves in summer as well,

What Will Be So Special About First Lunar Eclipse of 2019

It is not something new for a lunar eclipse and a full moon to coincide. The special thing about the eclipse that it will coincide with a supermoon; this implies that moon in this situation will appear bigger and brighter than average, but it will appear smaller and dull than a typical supermoon. Those who love to see an eclipsed moon should note that next lunar eclipse after this one will occur sometimes in May 2021.

According to National Geographic, following are other worth seeing events related to spacial bodies that will occur in 2019.

Other Celestial Events of This Year

Apart from the Super Blood Moon of 2019 that will take place in January, several other amazing things are lined up to show in the sky.

On April 23 the moon will come closer to Jupiter. Seeing such a close encounter of moon and Jupiter will be no less than treat because it is not something that happens every day. Those who want to make this scene more special should use telescopes and binoculars rather than relying on naked eye only.

See, how amazing the year 2019 is !!! It is not only bringing a lunar eclipse coinciding with super blood moon but also a total solar eclipse. Yes, the people of Argentina and Chile, will luckily get to watch a total solar eclipse when moon will shadow Sun from Earth. The event will take place on July 2 in several part of North America.