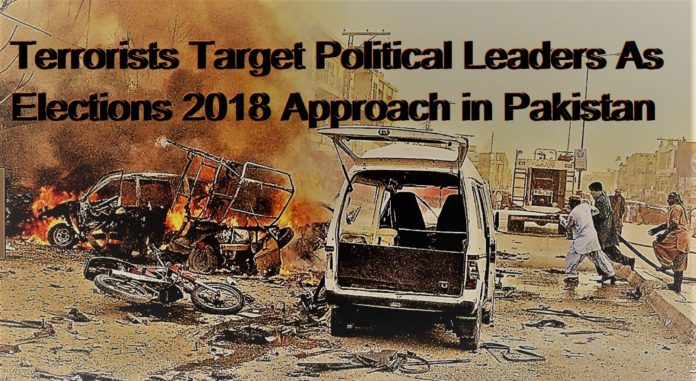 General Elections 2018 are all set to be held in Pakistan on July 25. There is a celebratory atmosphere in the country as it is witnessing the democratic transition of the government for the second consecutive time in history. But it seems that extremist elements have got plans to sabotage the democratic process as they have started targeting the meetings, rallies, and convoys of candidates in KP (Khyber Pakhtunkhwa) and Baluchistan.

Now, when the elections are less than two weeks away, terrorists have almost killed more than 150 people including the political candidates. Here is a detail of gruesome suicide attacks that took away the lives of innocent people along with leaders.

The first attack that reportedly involved a bomb planted on a motorcycle hit the MMA (Muttahida Majlis-e-Amal) leader Shiren Malik in Bannu. Shiren Malik along with six other people was injured. The victims were then taken to DHQ hospital Bannu.

The second brutal terrorist incident took place when a suicide bomber hit the political gathering of ANP (Awami National Party) candidate Haroon Bilour in Peshawar on July 10. The attack resulted in the martyrdom of 22 people among which one was PK-78 leader Haroon Bilour. Sadly, Haroon’s father Bashir Bilour who was a senior ANP leader was also martyred in a suicide attack in 2012. Political parties from Pakistan condemned this suicide attack. PPP leader Bilawal Bhutto Zardari also suspended the campaigning for elections 2018 for one day.

Sad to learn of Haroon Bilour and 2 other ANP workers deaths and strongly condemn the terrorist attack at the ANP corner mtg in Peshawar. All political parties and their candidates must be provided proper security during their election campaigns by the State.

The Attack on Convoy of Akram Durrani

Another MMA leader Akram Khan Durrani who is contesting from NA-35 Bannu became the target of the terrorists. The politician luckily survived the attack, but four other people were martyred as a result of it.

The worst attack that took away more than 128 precious lives targeted BNP (Balochistan Awami Party) leader Nawazada Siraj Raisani. It took place on the day when Pakistanis were busy in debating over Maryam Nawaz and Nawaz Sharif’ arrival in Pakistan. This suicide attack that martyred Siraj Raisani, the youngest brother of former Chief Minister Baluchistan Aslam Raisani ran a wave of mourning in the entire country. The deceased was to contest from NA-35 Mastung. According to media reports, Raisani’s 14 years old son had also lost his life in a 2011 suicide attack that also took place in Mastung.

How General Elections 2018 Will Determine Fate of Pakistan