Amitabh Bachchan Steals the Show in Thugs of Hindustan Trailer 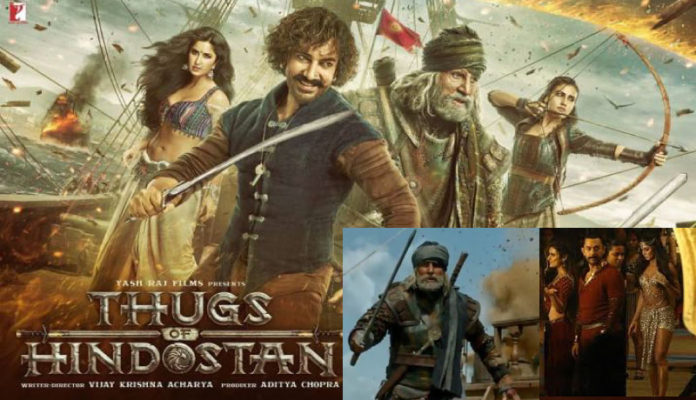 The much-anticipated Thugs of Hindustan trailer is out proving that Amitabh Bachchan is still capable of doing wonders. The film’s story that captures the eighteenth-century Sub-Continent has some breathtaking scenes and powerful visualization which is inevitably going to be a turning point in Bollywood.

With the release of the motion poster of the film that showed Aamir Khan resembling the captain Jack Sparrow, viewers were anticipating the film to be something like Pirates of Carribean. Well, Thugs of Hindustan Trailer doesn’t satisfy such speculations as it hints about a unique story that shows the context of some true incidents taking place in eighteenth-century sub-continent.

Till now what has captured the attention of the audience in Thugs of the Hindustan poster is Amitabh Bachchan’s powerful acting, his strong voice, and expressions at their core perfection making him nail the role of a rebellion who fights for freedom in his way.

And, then come Aamir Khan’s dialogues that he speaks with the English officers and his confrontation with Amitabh Bachchan. Irrespective of the story, these are the carefully crafted roles of Khan and Bachchan which are likely to steal the show.

Apart from Amitabh Bachchan and Aamir Khan other actors who capture the attention in Thugs of Hindustan trailer are Fatima Sana Sheikh and Katrina Kaif. While Katrina’s role might not be something new from what she has been playing in his past films, it is Dangal actress Fatima Sana Sheikh who is going to present something unique. After seeing her playing a gold medal-winning, wrestler fans will see Fatima fighting with traditional weapons while sharing the screen with Amitabh Bachchan.

If Fatima succeeds in leaving an impression with her acting, Thugs of Hindustan will be a breakthrough of her career.

A Film Capable of Deciding the Future of Hindi Cinema

Thugs of Hindustan trailer might not be sufficient to help speculate if the film can introduce a new tradition in Hindi cinema but it can give hope to the fans, that there will be a better story and script to watch in future. Well, if that is the case, then it all depends how rest of the filmmakers are willing to follow the footsteps of Aamir Khan who always brings something new to Indian film viewers and gives them a story which is not only entertaining but also full of lessons.

Twitter Users Mourn the Death of Logic in Race 3