US Dollar Was Down to PKR 76.25 Giving Pakistanis Fits of Laughter 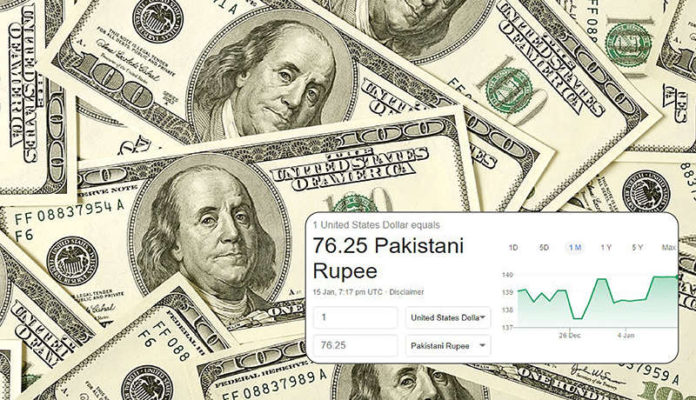 Pakistanis couldn’t believe their eyes when Google and other Search Engines showed US dollar down to PKR 76.25. It was just a moment of shock and followed mixed reactions. Few people went on to praise Prime Minister Imran Khan’s government for such a miracle. While the majority of them stopped having faith in Google anymore.

They were sure if Google was drunk.

What Was the Reason Behind Decline in US Dollar Price

Such a surprising drop in US dollar price was not because the demand for Pakistani rupee increased overnight or Pakistanis were drowned in dollars up to knees. In fact, it was all because of a bug in the systems of financial services company Morningstar that provides exchange rate data to major search engines.

One US Dollar in Pakistan costs almost 139 Pakistani rupees. There are several factors for currency devaluation in Pakistan, but one doesn’t know about the reasons behind such a sudden currency appreciation. The fact reflected well in the form of that diverse and hillarious reaction on Twitter.

For them, Google was simply not in its senses.

This reaction said it all.

This Urdu version of Am I a Joke to You Memes fit the situation scarily well.

It was indeed no less than a prank.

There erupted a Google meme giving people a reality check about the price of US Dollar.

There couldn’t have been a better joke with Pakistanis.

Why Pakistanis Are So Concerned About It

There are obvious reasons for Pakistanis to worry about US Dollar to Pakistani rupee rate as it has to do with the economy of country. But, the way folks were overwhelmed with the phenomenon showed if everyone was into foreign exchange business or what.

What Does the Event Teaches Us

We can simply infer two things from this event. Firstly, Google is not always right. Secondly, people need to understand mechanics behind the rise and fall in currency’s value in comparison to the standards. Such a huge change in value of any currency is not the matter of few hours and it takes a significant efforts like huge increase in exports and volume and other such things that happen in a course of months and even years.

So, people must do some calculations before starting celebrating an apparently pleasing fact or cursing something otherwise.