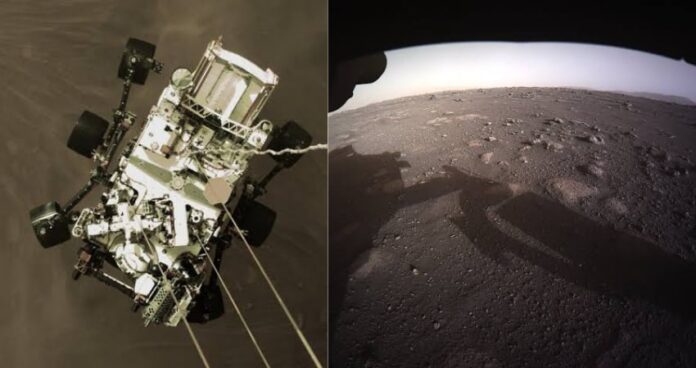 NASA has released stunning videos from Mars after an incredible journey. The perseverance rover reached the red planet within seven months and landed in Jezero Crater on 18th February 2021. The SUV-sized robot was equipped with seven cameras focused on recording high-definition imagery. The data it is sending back from Mars is helping the scientists and engineers to improve technologies, that are required to probe Mars properly.

Few countries have taken part in Mars 2020 mission to find out whatever happened to the water, which existed on Mars billions of years ago. Besides USA, 1 orbiter from China and 1 from UAE are operational right now. China also has one rover and one lander en-route with an estimated time of arrival in May 2021.

New Videos from Mars Are Clearer Than Ever

This is the first time the agency has captured the detailed video of a successful landing of spacecraft on Mars. Many videos were made on Mars by different robots in stop-motion action but perseverance (AKA Percy) offered the most clarity in detail.

Percy will deploy Ingenuity (the first space helicopter on Mars) after almost 2 months of its touchdown. The agency planned to use this drone copter to scout the best driving route for future rovers by tagging points of interest. Right now let’s just enjoy the videos from the red giant.

The Landing of Rover on Mars

Percy’s landing video was awe-striking and a highly emotional moment for the space agency. A deputy lead for the mission Aaron Stehura has reportedly stated that they have not seen anything like the images taken from this robot. The video connects the viewer with this huge moment that took years of effort from thousands of scientists and engineers.

The Surface of Mars

As Percy was landing on the surface of Mars, it sent a selfie back to its space center for a memorable collection. Swirls of dust can be seen, which were caused by sky crane’s rocket thrusters. The sky crane was detached timely and crashed at a safe distance.

Next video shows panoramic view of the surface that Percy is exploring. It is also the very time any spacecraft has captured a highly detailed picture of a planet beyond Earth. It shows rocky terrain with delta cliffs in the background.

Here Percy will search for the remains of microscopic life believed to have existed once around the delta, which also fed the lake in Jezero Crater long ago. It will store samples of drilled rocks on the surface for retrieval later. Reportedly, two more robotic missions to Mars have been planned by 2031, that will deliver these samples back to earth.

The Sound on Mars

Nasa hoped to record the maximum sound from the descent with a microphone, but it failed. However, the team managed to receive the sound from Percy on the surface. It was mostly the whirling of the machine but a quiet sound of the wind gust can be heard after 10 seconds in the video.

The Sunset on Mars

Percy managed to send back an exhilarating video of sunset from Mars. It looked drastically different from the Earth’s sunset, which some users described visually.

It appears that there is a blue tinge around the sun which could be caused by suspended dust particles in the atmosphere. The blue color of light penetrates the atmosphere more efficiently than others due to exactly the right size of dust particles.

How Many Rings Does Jupiter Have?