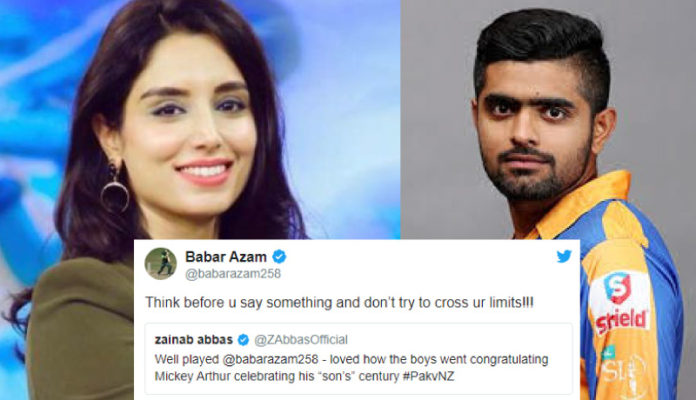 The second match of New Zealand Vs. Pakistan Test Series 2018 is taking place in U.A.E but fans of Pakistani cricket are talking about something else rather than cricket. It is the Babar Azam’s brutal reaction over sports anchor Zainab Abbas’s congratulatory tweet which is making people scratching their heads.

Babar Azam : Think before u say something and don’t try to cross ur limits#TheseTwitterFights pic.twitter.com/SVenRdo56Y

It all began with Babar Azam’s good performance in the test match. The batsman made his first test century and received huge applause from fans and fellow cricketers.

Congratulations on first Test 100 Babar Azam! It is always a special moment, I still remember mine 😇 Well played Haris Sohail hope we will get quick wkts tomorrow, must win game 🇵🇰#PAKvNZ

But, it seems that cricketer didn’t like something about the tweet or it was probably the word “son” that offended the batsman so he asked Zainab to think before she says something and not to cross her limits.

Think before u say something and don’t try to cross ur limits!!! https://t.co/w8I8139OeY

Why Babar Azam Said So?

Babar Azam who was also listed in the ICC’s team of the year in 2017 is one of the talented cricketers of the world. The young batsman is proving himself in the field every passing day. While fans are happy about his performance and his achieving of a milestone in test cricket they are also thinking why he responded in such a blunt manner to what seems a simple appreciation of his achievement.

Zainab Abbas’s tweet just seems a simple appreciation of  coach Mickey Arthur who is mentor and teacher of every single player. It is more likely for teachers to call their pupils and trainees as their kids. So, apparently there doesn’t seem anything wrong with what Zainab said.

But, fans were coming up with their theories. Few were even raising a point that Babar Azam’s response was due to his lack of education and the fact that he couldn’t fathom the real meanings of what was just a congratulatory note.

Not saying that Education/English speaking skills should be pre-requisite to play International but what Babar Azam, our most talented batsman, just did is the clear cut case of lack of education.

Its better if players are made to stay away from social media or hire SM managers.

This Twitter handle suggested that Babar Azam responding in this manner was because of his arrogance and his not being able to handle success.

"Babar Azam" replying to a female media personnel in such a tone, when nothing wrong has been said shows that success is getting to his head now & reflects arrogance. @ZAbbasOfficial still showed grace and didn't reply but this is unacceptable! pic.twitter.com/xsIX9Q90KT

Few were also calling this reply as an off-field performance.

Preforming On the field and off the field as well.. Sae khail gya benchoo😂😂…#BabarAzam pic.twitter.com/G2UAbEje9i

This guy concluded that it was because of Babar Azam’s lower IQ. He used the cricketer’s example to generalize it for all Lahoris.

Zainab Abbas is yet to react on what Babar Azam said in response to her tweet. But fans are still unable to get what was that after putting up such a brilliant performance.