Pentagon Suggests Sending another Warship to the Middle East 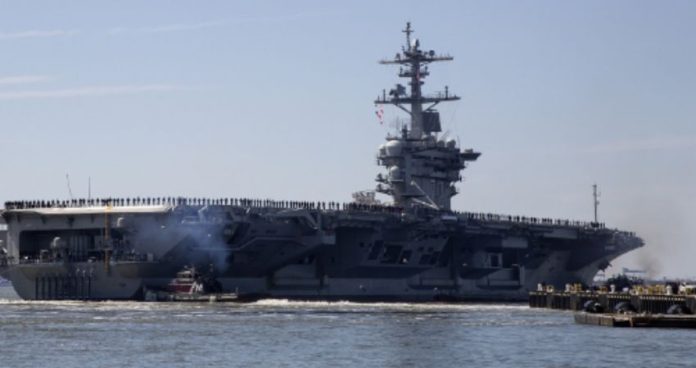 The Pentagon has approved the deploying of USS Arlington and Patriot missile system in Gulf. The US military reportedly wants to protect its personnel deployed in the Gulf along with a squad of B52 bombers which are currently stationed in Qatar.

The Pentagon’s Suggestion to Send a Warship

A Pentagon spokesperson while talking to media confirmed the deployment of USS Arlington and a Patriot missile system to the Middle East along with a squadron of B-52 bombers.

The deployment of these assets comes as a result of a US intelligence report suggesting that Iran may be planning to attack US personnel deployed in the region through its proxies. The report revealed intricate detail on how the attacks were to be carried out but failed to disclose the time of execution.

Tensions in the Region Are On the Rise

Ever since the US listed Iran’s Revolutionary Guard as a terrorist organization tension between the two countries have skyrocketed. Iran responded by threating to close the Gulf’s Strait of Hormuz which serves as a vital oil transport passage. The recent oil sanctions placed on Iran by the US and the threat of placing sanctions on the countries that Import oil from Iran has apparently done little to normalize the situation.

Iran in response to this announced that it would step back from the nuclear deal but will uphold the international accord that it signed in 2015.

Would It Lead to Another War?

A Pentagon spokesperson while talking to the media stated  that they had no intention of lunging the country into another war. Their purpose is merely to clarify that if their interests and those of their allies are threatened, they will not hesitate from using force to preserve them.