Miss Universe 2019- All About Zozibini Tunzi from South Africa 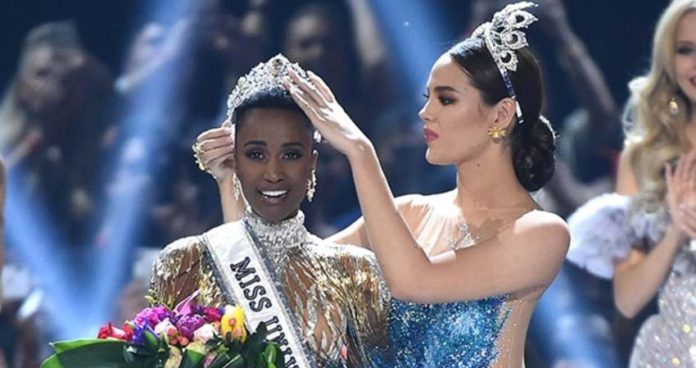 Zozibini Tunzi from South Africa has won the Miss Universe 2019. Tunzi who is 26 years old was crowned on Sunday Night at Tyler Perry Studios in Atlanta, Georgia. She has become third woman from South Africa to win this pageant. Madison Anderson of Puerto Rico and Sofia Aragon of Mexico were first and second runners up respectively. Since Leila Lopes, Miss Universe 2019, Zozibini is the first black woman to win this pageant.

Who Is Zozibini Tunzi?

Zozibini Tunzi who is model by profession has also won Miss Universe 2019. She studied Public Relations at Cape Peninsula University of Technology in Cape Town. She also worked as an intern in Oglivy Cape Town’s Public Relations department.

Zozibini is also involved in activism for spreading awareness on gender based violence and importance of natural beauty among women.

In an answer to a question in Q&A session Tunzi said, “It’s time that we stop asking women what to do and start asking perpetrators to do better to be better and to start treating women in a way they deserve to be treated. It is not up to us but it is up to the perpetrators to stop doing better.”

Folks are happy over the fact the women from diverse ethnic and cultural backgrounds are taking the center stage. Social media accounts were quick to highlight that black women were dominating the beauty pageants in 2019 and the year as a whole belonged to them.

Tunzi’s win was simply a rejection of the sterotypical beauty standards that the world has imposed on women. The Miss Universe 2019 confidently spoke on this while encouraging women to be confident on what they are.

What Is Lacking in Young Girls?

Zozibini Tunzi looks very clear on her stance of women empowerment. She seems to have a comprehensive understanding of problems that young girls in modern age are facing.

She said in an answer to a question, “I think the most important thing we should be teaching young girls today is leadership. It is something that has been lacking in young girls and women for a very long time, not because we don’t want to but because what society has labelled women to be.”

Everything About Catriona Gray, Miss Universe 2018