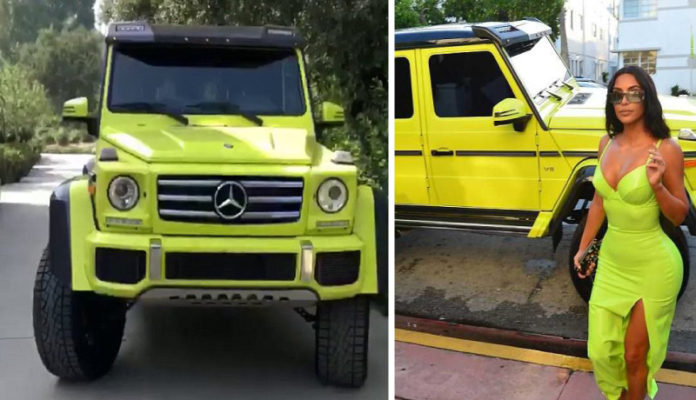 Famous Kardashian family keeps on making headlines for things that rich people do. This time it is the Kanye West’s surprise gift of Neon Mercedez to his wife Kim Kardashian that caught the attention of tabloids. Following her tradition, Kardashian shared the picture on her Instagram to receive a mixed response from her fans and critics.

Kim Kardashian who received this yellow Neon Mercedez as a random surprise from Kaney called it a Truck of her dreams. The reality show star turned a social media celebrity had reportedly rented a green Mercedez G series SUV in Miami.

While sharing the video of her new truck gifted by her husband, Kim Kardashian said, “I got the truck of my dreams. I loved it so much in Miami, and I kept on talking about it.

Kim Kardashian Biography is filled with many controversies and so the comments on her social media posts. Keeping Up with Kardashian star had to face criticism for sharing the story of receiving a neon Mercedez from Kanye West as a surprise gift.

A Debate on Kim Kardashian’s Mercedez

There is no lack of critics and fans of Kardashian family that faces backlash for being famous for nothing, posting about their lavish lifestyles and promoting their fashion brands through several means.

This time when Kim Kardashian shared the excitement around her new Neon Mercedez truck on Instagram, she received a mixed response.

Here is what they had to say about it.

One of the Instagram users wrote, “Instead of spending shit money to give more cars to his Trump Kartrashian; he should help some of his people and do some charity work.@

People also envied Kim Kardashian’s luck as one user wrote, “why can’t I get such a surprise like this.”

Even Kylie Jenner Has the Same Truck

Interestingly, Kim is not the only member of her family who owns a neon Mercedez truck. Her 21 years old sister Kylie Jenner who is on her way to becoming the youngest billionaire also has the same kind of orange vehicles. The social media star also shared a video showing Kylie  Jenner and captioned it as Sisters Goals.

In the video clip, she said, “when you pull out to your sister’ house to say good morning and you guys have matching trucks.”