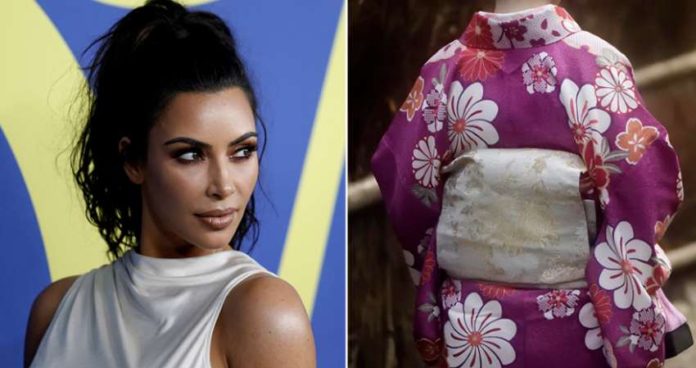 Kim Kardashian is considered one of the most fashionable icons in the world who has huge fan following on social media. Just recently Kim launched a new line of underwear she calls kimono underwear, and this didn’t settle well with the Japanese people.

The kimono is a sacred dress worn by the Japanese on special occasions by both male and females.Every event has its own unique kimono, which is accompanied by its ceremony. A kimono is typically made of silk and is lose sleeve robe usually tied with a sash. It dates back to the 15th century and is the national dress of Japan.

The kimonos customarily worn by women are very colorful and are heavily embroidered. In most cases, they are passed down from generation to generation until they wear away.

Boy This Is Not Gonna End Well

It seems that the new product has become just another scandal in Kim Kardashian biography; She just launched her new line of cloth called kimono underwear in Japan after her brand had a successful run in the States. Unlike the US, she has come under heavy fire by the Japanese people as they feel insulted by the clothing lines name and its function.

A Kimono Is Not An Underwear

Japan being a close ally of the United States has started multiple joint ventures with it after world war two, which are running successfully. Many Japanese are amazed at how little and how ignorant Americans are about their culture. I mean calling kimono underwear is pretty stupid.

American women who have had the pleasure of working and staying in Japan have also stepped up to defend the traditional dress in their unique way.

While defending their culture from further ridicule, the Japanese people are requesting Kim not to destroy their culture and let it remain the way it is.