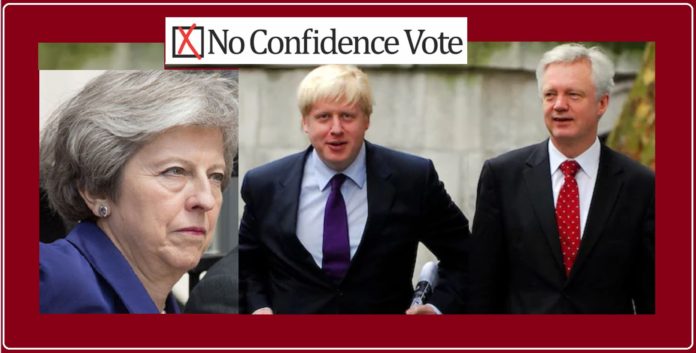 Tory MPs might trigger a vote of no-confidence against UK Prime Minister Theresa May after the resignation of David Davis and Boris Johnson. The senior ministers quit due to disagreement with UK Prime Minister’s Brexit plans that she proposed to her cabinet in Friday’s meeting at Chequers.

The said plan that caused anger among pro-Brexiteers discussed the nature of the relationship between the UK and EU after Brexit.

The vote of  No-Confidence Against Theresa May

After the resignation of David Davis and Boris Johnson, Theresa May is facing the new cabinet with chances that Tory MPs might trigger a vote of no-confidence against her. But, her allies state that only 6 MPs dissented to May in Tory backbench 1922 committee.

And, according to the party rules, 48 MPs must show a willingness before the chairman of 1922 committee to move a vote of no-confidence, reported BBC.

The UK is quickly moving ahead with legislation related to Brexit impact. It has recently devised a mechanism for EU citizens who want to stay in the UK even after Brexit. The latest Brexit plan agreed by UK cabinet at Chequers talks about UK-EU relationship with reference to Common Rulebook, Joint Jurisdiction, Facilitated Customs Arrangement, and Free Movement of People.

Overall these were the things about common rulebook and a joint jurisdiction that reportedly caused dissent among pro-Brexit Eurosceptics.

According to plan, the UK will maintain a common rulebook of agricultural and food products to avoid friction at UK-EU border with different co-operative arrangements between EU and UK competition regulators.

Further, the courts in the UK and courts in EU will establish a joint institutional framework to interpret UK-EU agreements. Further, after Brexit UK will be able to control its own tariffs with the rest of the world. And free movement of the people will end but EU and UK will come up with a mobility framework for immigrants.

Theresa May Defends the Brexit Plan at Chequers

While the resignation and dissent by Tory MPs on Brexit plan might have made analysts speculate a vote of no-confidence against Theresa May, the PM has defended the plan before MPs; and according to media reports, the majority of them seem convinced.

Regarding plan at Chequers, Theresa May remarked that people who voted for Brexit wanted to end the free movement, end the jurisdiction of EU courts and make UK stop sending money to EU. So, the Brexit plan aims to do all these things that people wanted but “we’ll do it in a way that protects drops and enhances our economy for the future” said May reportedly.