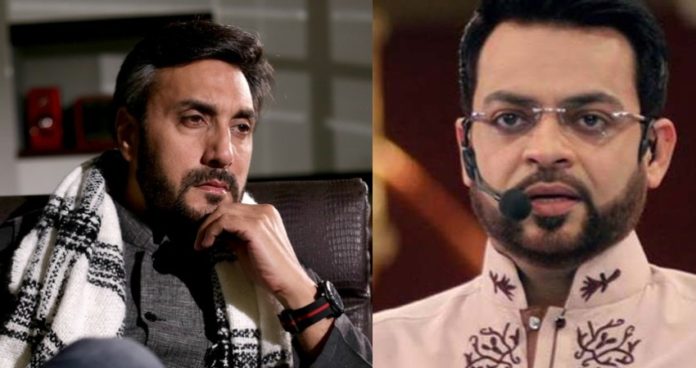 Amir Liaquat a so-called scholar, anchorperson and game show host is facing criticism for saying something really indecent. He is already infamous for facing  criticism for using foul language on live TV without repercussions. Mainstream media encourages his bullshit and people cheer him on. His recent condemnable act came on the limelight when he happened to question Adnan Siddiqui on his show called Jeevay Pakistan.

In this show, Amir Liaquat pointed out that Adnan Siddiqui did Mom with Indian actress Sridevi who died he also worked with Irrfan Khan who also died. The anchor then asked Adnan what would have happened if he worked in Mardani II.

This was really a shameful act of Amir Liaquat in which he openly disrespected multiple deceased artists; the reason why many people condemned him on social media.

It can be seen that Amir Liaquat’s sense of humor is far away from common sense. That is why Adnan Siddiqui failed to find it amusing even for a tiny. In fact he was disgusted and avoided further comments on such a conversation. It is impossible to find that funny for any person who doesn’t have a pea for brain. Unfortunately, the same cannot be said for the people in the crowd. They are the major factor for making these talentless and pathetic people famous.

An Apology through Social Media

Amir Liaquat didn’t not only hurt Adnan‘s feelings, he gravely disrespected the artists who are no longer alive. No wonders why Adnan Siddiqui who seems strong contender of professor from Money Heist had to pen this note.

In the statement shared on Twitter Siddiqui apologized from the families of deceased artists.

Adnan stated that it was totally inhumane from Liaquat’s side and he had learnt his lesson by joining his awful show. Remarks made by Liaquat are damaging for the society (as it can be heard from the video that people enjoyed that stupid excuse of a joke).

People supported Adnan Siddiqui which is surprising because the insensitive audience in the live show didn’t seem that enlightened.

How Did Amir Liaquat Apologize

Live show me aisa hota hai? Seriously? Some Pakistani people are still going to believe this. This slipping of the tongue is going on for decades and media houses are still hiring him on their channels. The anchor had also received huge criticism for his second marriage with Tuba Amir.

This is not the first ever controversy that Amir Liaquat has got involved in. The anchor continues to remain in limelight with his stunts that often seem disrespectful.