Prince Philip in A Car Crash- What Really Happened? 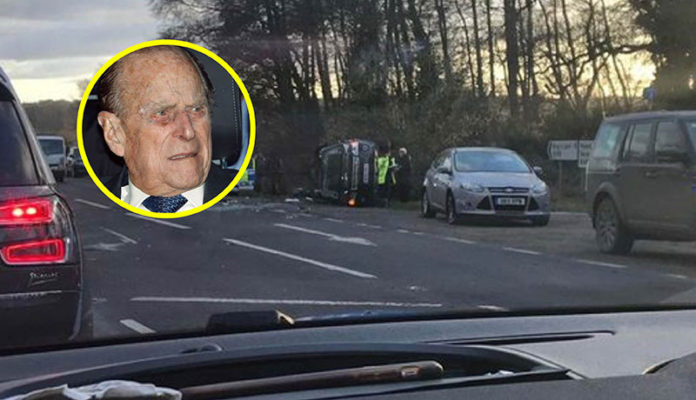 Here comes another reason for Royal family to remain in limelight. According to Buckingham palace Prince Philip was in a car crash.

So, 2019 has not begun on a good note unlike 2018 when royals remained part of the news for Prince Harry and Meghan Markel wedding

Did Prince Philip Get Injured ?

While driving his land rover prince Philip was involved in a nasty car crash near the Queen’s Sandringham estate. The car flipped over and got damaged heavily but luckily the Duke of Edinburgh came out unharmed. The two women that were involved in the crash were taken to the hospital where they were treated and later discharged.

The police say that they are looking into the matter and so far have as per their requirement administered both the concerned individuals with a Breathalyzer test which came back negative.

Police have cordoned off the place believing the route to be quite dangerous as people often speed on it. Authorities are looking into road safety concerns of the area.

One local resident said she drove by the crash and was horrified. She later came to know about what had happened. Another resident later reported that he was with his 16yrs old daughter when he drove 100 feet by the crash and could see the flipped car clearly.

Authorities were quick to respond and have already started to clear the debris.

The Peoples Say What?

Many have taken to social media to express their concerns and be thankful for his well being The Archbishop of York, John Sentamu along with others tweeted a prayer

Folks questioned why Prince Philips was driving by himself at such an old age. Like, he is about to turn 98.

Then there were some who brought back the age-old wound that just never seems to cure. Well, this tweet is seriously harsh as it not only talks about alleged murder of Diana in a car crash but also accuses royal of staging Prince Philip’s car crash as a distraction from Brexit.

More people were referring to Diana murder controversy, after Prince Philips. And, they had also some reasons for bringing in such reference.

More from such satirical accusations

Can It Really Prove a Distraction from Current Situation?

While other are saying that this is just one of their stunts to distract the people from the current situation at hand.

Or it was an attempt on life of Duke of Edinburgh

Islamophobes got another chance to make a case for their reservations.

the list of strange claims go on  while others  are just not that bothered  with this incident and say that there are bigger problems that need our attention  and we should focus on them and the royals should not take part in such stunts if it is one.