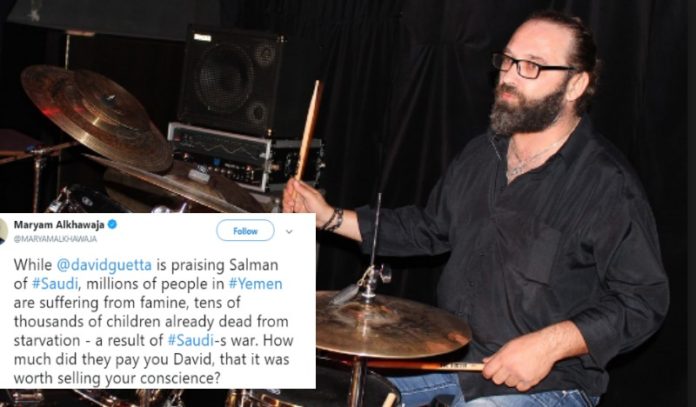 Saudi Music concert which was a part of the Formula E racing event has become a subject of heated debate on social media for several reasons. While, folks are considering this sports and music event a beginning of major change in Saudi society, human rights activists have their own reasons to worry about.

What really made human rights activists furious was remixing a song which was a tribute to Saudi King Salman Bin Abdulaziz.

David Guetta, 51 years old French Dj,  played tribute songs praising Saudi King and invited the ire of activists who called him for his ignorance towards Human Rights violations by the regime.

Bahraini rights activist Maryam Al Khwaja asked Guetta in a tweet, “How much did they pay you, David, that it was worth selling your conscious.”

Saudi Arabia often faces criticism for its alleged human rights abuses in Yemen and being an American ally in its proxy wars. Saudi crown prince Muhammad Bin Salman is also under fire of right activists for his alleged involvement n Saudi Journalist Jamal Khashoggi murder. Saudi regime is unpopoular for silencing its dissents and curbing the freedom of expression.

There Was A Mixed Feeling

While Human rights activists had there own reasons to be angry at David Guetta, folks were generally happy that conservative kingdom of Saudi Arabia was undergoing a social change. Saudi sports and music enthusiasts were gathered at one place without any gender discrimination. There was an air of entertainment in Riyadh as internationally famous singers like Enrique Iglesias, Black eyed peas, Ambr Diab and Scott Forshaw performed at the event.

Famous wrapper Jason Derulo who performed at PSL Opening ceremony also rocked the Saudi music concert, a first of its kind in Kingdom.

But people were analyzing what was actually happening in Saudi Arabia. At one hand there were socio-economic reforms and on the other hand MBS (Muhammad Bin Salman) has his ego before him.

The year 2018 has witnessed some major socio-cultural changes in Saudi Arabia. The kingdom allowed its women to dirve after decades. The country embraced its arms for cultural festivals and this Saudi music concert was one example of its kind.

But, the country still has a long way to go to liberate its people from the clutches of suppression.

Vogue Under Fire For Featuring Saudi Princess Behind the Wheel