Pakistani celebrities, Minal Khan and Ahsan Mohsin from the Pakistani drama industry, recently got engaged. Their social media accounts confirmed the news about their relationship. The newly aligned couple got engaged on valentine’s day, according to the pictures posted by these celebrities.

How Long have Minal Khan And Ahsan Been Dating?

Reportedly, Minal Khan And Ahsan Mohsin Ikram have been considered to be dating since 2017. The particular reason behind such consideration is their last Drama ‘Parchayee’, in which they worked side by side. However, back in 2018, when people came to know about their unannounced relationship, they found it nothing more than just rumors until recently. Also, several entities even trolled their alleged relationship on multiple social media platforms.

Both Ahsan Ikram and Minal khan are believed to be among the two cute Pakistani celebrities, who are strongly cherished in the country. People have always complimented on their on-screen chemistry. In light of such claims, many individuals on social sites also mentioned their off-screen romantic association. However, no one considered it true until the 2021 valentines’ day.

As per multiple social media crawlers and official accounts of both popular personalities, the news regarding their engagement seems quite authentic. This is because the khan posted a picture with Ikram on her Instagram account by saying “love is in the air” on valentine’s day. The post probably meant that the renowned actress was revealing her emotions for Mohsin. 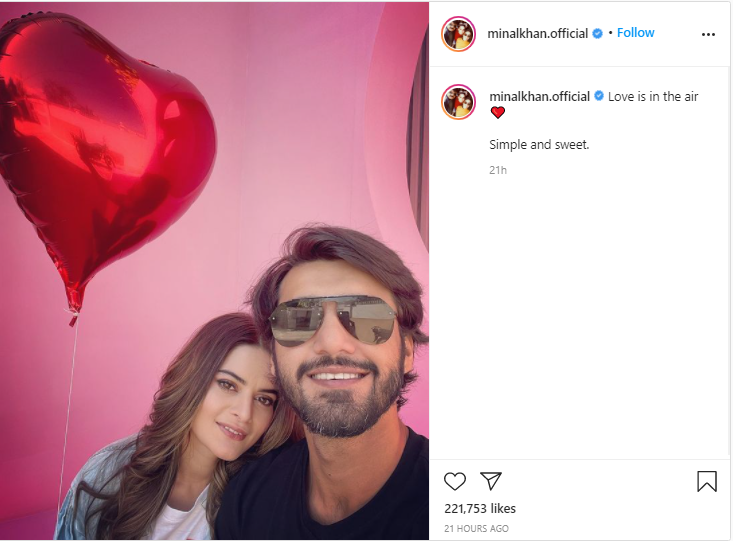 In addition, she supposedly shared another picture of her hand in which she was showing her supposable engagement ring.

How Are Fans Reacting To The Engagement News

Minal Khan is recognized for her roles in many old Pakistani dramas as well as some latest ones. Similarly, Ahsan Moshin Ikram is also famous for his many marvelous roles in multiple Pakistani tv shows. All in all, both celebrities have a huge fan base; and since their news of getting engaged is getting viral, fans are also reacting to it.

Many have already congratulated them via commenting on their posts. Several are yet flooding Twitter, Instagram, and Facebook with the quotes and messages reflecting uncertainty regarding the big news.

Aside from the non-believers, a good number of individuals are hoping for their better future on multiple social media platforms.