Lesbian Couple Proposing Each Other Goes Viral on Twitter 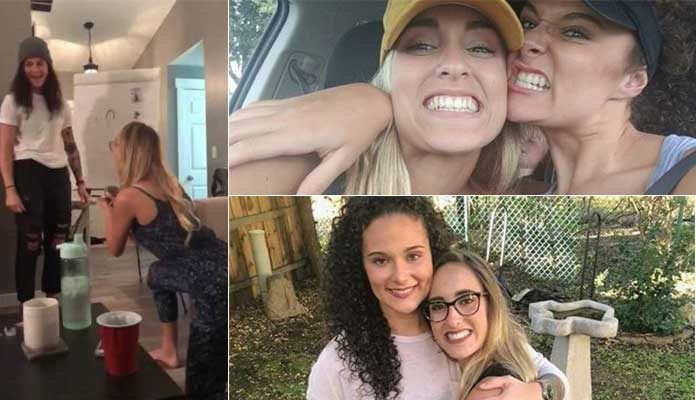 The video of a lesbian couple proposing each other at the same time is going viral on social media. Tori and her girlfriend proposed each other amidst a Pictionary game and got the biggest surprise of their life.

Tori and Berkley, the lesbian couple, unknowingly planned their proposals on the same day. The adorable couple was living together from last four years and finally decided to get married. According to BBC, Tori made her plan with Berkley’s mom to put up the proposal but didn’t know much about the coincidence.

The lesbian couple proposing each other at the same times not only surprised the uncles, aunts and other friends, present on the scene but also the social media. The couple earlier decided to share their video via Facebook, but it went viral after a cousin of one of them shared the clip on Twitter. Till now, the video has received more than 5 million views.

Double proposal playing Pictionary ? so amazing & I’m so happy for you 2? this was so perfect ?? @BerkleyCade @Toorriiiiiiiiii pic.twitter.com/uG7R5UIQNm

What Is So Interesting in Proposal Video?

The proposal video is nothing less than a puzzle whose answer leads to a surprise. Video shows girls playing Pictionary; Berkley is doing drawing on the board and Tori is making guesses with the words like ‘propose; and marry. Then comes the moment when Tori bents down on the knees and shows up her ring. At the same times, some family friend prompts Berkley to show her ring too, who also bends down on knees and proposes her partner. Both of the girls said yes and got appreciation from the crowd in the form of a round of applause.

About their video of lesbian couple proposing each other, “Tori reportedly said, “I planned a proposal for months.. little did I know she planned one too.”

Tori and Berkley are all set to marry on September 27, 2019. They are planning to get married in a friends and family oriented ceremony in Texas.

Same sex marriages are legalized in 50 states of the United States. In 2017, Australia also approved for gay marriages.

A First Lesbian Relationship for Couple

The reports also suggest that Tori and Berkley, the lesbian couple proposing each other are living in first relationship of this kind. Tori is the first gay person in her family so they found it difficult to accept the situation. But, Berkley’s family supported her. Perhaps, this was the reason why the couple didn’t hesitate to propose each other in front of friends and family members.

Tori also took Berkley’s mother into confidence for proposing her daughter. She told her about buying a ring for her partner. And, she was lucky enough to get a positive response from her girlfriend’s mother.